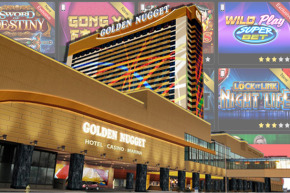 GoldenNuggetCasino.com has been a pretty impressive player in New Jersey’s online gambling scene. Though not in the first wave of online sites to launch in the state, Golden Nugget has been plugging along steadily with new games and innovations that have made it a top site in New Jersey.

It’s also a strategy that has allowed Golden Nugget to set a new benchmark for online casinos by offering its 500th game at the site. That’s right, Golden Nugget now offers more than 500 games, including more than 300 for mobile devices.

Most of the games, as you would expect, are online slots and table games such as blackjack and roulette. Golden Nugget offers 441 slots, 15 blackjack games, 29 other table games and 21 video poker variants.

That’s a lot to choose from.

But, Golden Nugget has gone that extra mile with other options. The site has been a leader in offering live dealer action in New Jersey, for example. Golden Nugget now offers about eight different live dealer tables daily from 3 p.m. to 3 a.m., including hold’em poker, blackjack and baccarat.

Live dealer games are just what they sound like, with virtual streaming of a live table at the Golden Nugget in Atlantic City staffed by an actual human dealer.

They’ve even added slingo, a slot-style take on bingo games that originated in New Jersey.

This kind of game selection is clearly driving Golden Nugget’s success, but they haven’t forgotten the draw of solid promotions. After all, New Jersey’s online players love them some bonus dollars.

Golden Nugget offers a yearly race promotion (or leaderboard contest) divided into monthly contests. Combined, players can win part of $50,000 in monthly prizes (top prize: $5,000 in bonus dollars) and over a half million in total prizes for the year. Check out these prizes for the major end of year giveaway:

Top Prize: A yearlong Bentley lease or $30,000 in bonuses

Second Prize: Live the Dream Prize Package or $15,000 in bonuses

Add in game of the week and weekend promotions and Golden Nugget players are always in the race for prizes. Plus, Golden Nugget’s rewards program offers chances not only at bonus dollars, but also dining credits and comps at Golden Nugget Atlantic City.

So, lots of games, lots of choices and lots of rewards. Hmmm, this could be why Golden Nugget is No. 1 in New Jersey.

Check out iGamingPlayer.com’s Promotions page for the latest on bonuses, free play, promotions and more at GoldenNuggetCasino.com and other online gambling sites.