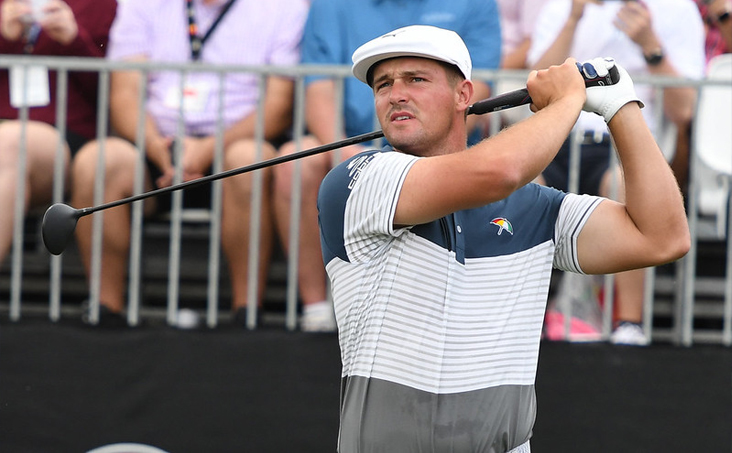 The Charles Schwab Challenge will be the first event featuring swings that mean something since the Players Championship was shut down in March. Usually a middle-of-the-road event, the Schwab will feel like a major with a great field and serious prize money. Will Bryson DeChambeau (l.) stay red hot?

When the PGA Players Championship was abruptly cancelled one day into the tournament last March, professional golf joined all the other major sports in dropping off the radar and losing some of its most prestigious contests.

But this week, that dry spell ends when the Charles Schwab Challenge. For the first time since the Arnold Palmer Invitational in early March, the best golfers in the world will head to the Colonial Country Club in Fort Worth, Texas for the first PGA Tour event in over three months.

Like most other sports that have gotten under way, there will be no fans on the sidelines, but betting windows and apps around the world will be open for what’s sure to be an exciting event.

“Golf is really popular with our bettors,” said Mattias Stetz, COO of Rush Street Interactive, which operates PlaySugarHouse.com. According to Stetz, the Match II: Champions for Charity in May, with Tiger Woods and Peyton Manning vs. Phil Mickelson and Tom Brady, generated the highest handle event outside a major in the U.S.

“We’re looking forward to this weekend’s event,” he added, “and expect the four days to beat the handle of any previous golf event, including any of the majors.”

Sign up to bet the Schwab at PlaySugarHouse.com, and tee off with a 100% first-deposit match—up to $250! New players only.

Normally, the Schwab is a nice tournament, but not one that stands out. Last year, sandwiched between the Players Championship and the U.S. Open, it only attracted a so-so field of players.

That isn’t the case this year. With two of the four majors being cancelled—the PGA and the U.K. Open Championship—ordinary tournaments like the Schwab take on more importance, because FedEx Cup points become more crucial. (And the FedEx is coming up quickly, starting with the Northern Trust on August 20 at TPC Boston, winding through Olympia Fields Country Club near Chicago and concluding September 7 at Atlanta’s East Lake Country Club for the Tour Championship).

Create a player account at Golden Nugget Sportsbook, and you’re automatically eligible for a $100 Risk Free Bet on your first settled bet. Details at GoldenNugget.com.

And that’s really just the start of the upside-down golf year of 2020. The U.S. Open will be held at Winged Foot Golf Club in Mamaroneck, New York, September 17-20. And if that isn’t strange enough, the Masters will be conducted for the first time in November, from the 17th to the 20th, with the pink dogwoods giving way to nice fall colors in Georgia this year.

Events like Schwab will be interesting gauges of who’s best prepared to compete the hardest in this strangest of golf years.

Some of the biggest names in the sport not named Tiger Woods will show up at the Schwab, starting with the world’s top professional, Rory McIlroy, who clocks in at +750 and is the moneyline favorite to win. Currently ranked No. 3 in the FedEx Cup standings, McIlroy’s finished in the Top 5 in every event he’s entered in 2020, including a victory at the World Golf Championships-HSBC Champions on the European Tour.

McIlroy leads the PGA in average first-round score (67.50). The three-time PGA Tour Player of the Year is currently +1600 to hold the lead after the Thursday round on BetRivers.com.

The FedEx Cup leader at the moment, Sungjae Im is 33-1, but in this crazy year, who knows what the impact of the layoff will be on any player?

Former world No. 1 Dustin Johnson is 28-1 and Bryson DeChambeau, who was on fire in the final couple of matches leading up to the lockdown, is 25-1.

There are some great matchups, pitting your favorite players head-to-head for the tournament. It’s great fun being able to track each player and estimate how they’ll respond during each day, sometimes each hole, of the tournament.

Some of our favorites include:

Place a wager of $10 or more on any futures event at BetMGM.com, and you’ll get $10 in FreePlay to use on any casino game!

And don’t neglect the in-play element of any golf tournament. The leisurely pace of play in golf is perfect for this kind of wagering—actually giving you time to consider who’s getting hot or cold without having to wait for a whistle or stoppage in play. And it gives you plenty of time to hedge your bets, in case your first instincts, betting prior to the tournament, turn out to be not so prescient.

So PGA golf is finally back. No more replays of golf’s greatest (but old and wagerless) matches. We’re back in action this weekend, baby!