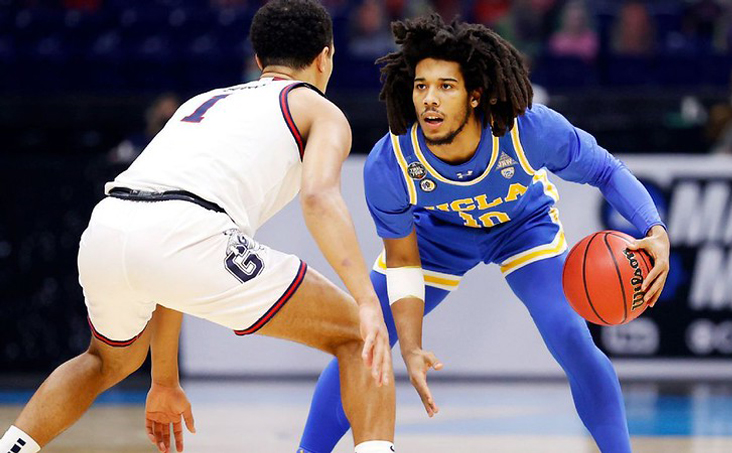 NCAA basketball is going west this year, with the Gonzaga Bulldogs and UCLA Bruins ranked No. 1 and No. 2 as the season starts.

College basketball season starts Tuesday, and there’s definitely a West Coast slant in the sport’s power teams. For the first time in 31 years, two West Coast teams are ranked No. 1 and No. 2 in the AP Top 25 Preseason College Basketball Poll. The Gonzaga Bulldogs, which have been hovering around the top spot for the last couple of years, are back again as the No. 1 team. The Zags are also a top pick to win the NCAA Championship in April, sporting +650 odds as the favorite at BetRivers. 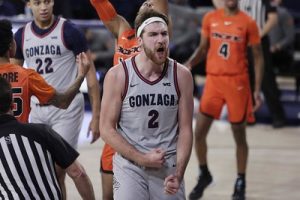 Gonzaga became a national powerhouse by reaching the Final Four twice in the last five years. Under Coach Mark Few, the team has made the NCAA Tournament every year since 1999.

Senior center Drew Timme has returned and is the leading candidate to win the John R. Wooden Award as the nation’s best player. Timme is at +600 on BetMGM, while Duke forward Paolo Banchero is next at +700.

Gonzaga has a tough non-conference schedule, facing the No. 5 Texas Longhorns, the No. 2 UCLA Bruins, the No. 9 Duke Blue Devils, and the No. 14 Alabama Crimson Tide, all before the second week of December.

Reward yourself with up to 40% more in profits on your winning NCAA parlays at BetMGM! Just place a 4-to-7-leg parlay on any combination of sports or events. 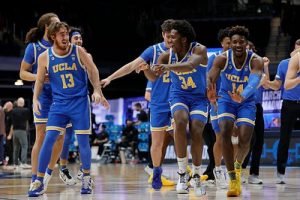 The second spot in the poll is a bit of a surprise. The UCLA Bruins, who finished the season unranked despite reaching the Final Four, are No. 2.

While the Bruins are the No. 2 team, they’re not the second pick to win the NCAA Title. UCLA is at +1000 to win the title at BetRivers, along with the No. 5 Texas Longhorns. The No. 6 Michigan Wolverines are ahead of both of those programs at +900.

UCLA should get a pretty good indication early in the season of how good they will be. The Bruins have tough non-conference games against the No. 4 Villanova Wildcats, No. 1 Gonzaga, and the No. 19 North Carolina Tar Heels.

The Bruins return four of their five starters from last year, and if they can survive the three ranked opponents, should have an easy time in the Pac-12. Only the No. 13 Oregon Ducks are ranked in the top 25. The Bruins are +115 at PointsBet to win the conference, followed by Oregon at +300.

Bruins Head Coach Mick Cronin said his team is ready for the season.

“Expectations are great,” Cronin said. “You want to sell tickets, create excitement – it’s all part of my job – it’s great for recruiting. But (it) is irrelevant in between the lines. If we taught anybody anything last year, your seed or ranking does not matter come tournament time.”

Catch value every day on the biggest games at BetRivers. From Moneylines to Spreads and Props to Parlays, these are the games and storylines you want to bet!

Return of the Bluebloods 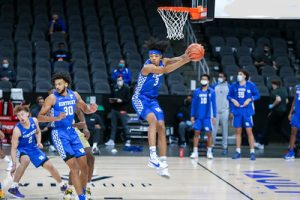 Last season was a down year for the storied programs in college basketball. The Duke Blue Devils, Kentucky Wildcats, Kansas Jayhawks and North Carolina Tar Heels all had disappointing seasons by their standards.

Duke and Kentucky missed the NCAA Tournament. UNC was bounced in the first round by Wisconsin, and Kansas was eliminated in the second round by USC.

The quartet returned this year all ranked in the AP Top 25. The Blue Devils, Jayhawks, and Wildcats made the Top 10, while the Tar Heels are 19th.

This is famed Duke Coach Mike Krzyzewski’s last season, and the 74-year-old isn’t interested in a farewell tour.

“I don’t want to go through memory lane here, or whatever,” Krzyzewski told the Sporting News. “I love coaching, and the reason we’ve had a continuity of excellence is because we’ve focused on the moment, and I’ve done that with every team.”

The Blue Devils are the +200 favorite at PointsBet to win the ACC, followed by UNC at +425.

Kentucky is a slight +300 pick to win the SEC, but Alabama is right behind at +325. Coach John Calipari, who has had a history of “one-and-done” players constructed a squad full of transfers with experience to avoid a repeat of last year’s 9-16 record, one of the worst in the program’s history.

“Last year is a blip. That’s so far behind me, what we went through and I learned from it and you move on,” Calipari said. “We may struggle early like we always do. … We’ve got good players, we’ve got good guards, we’ve got some physical players who are men.”

Sign up to bet on college hoops at PointsBet.com. You’ll be eligible for a first risk-free bet of up to $2,000, with an extra $100 in the bargain. Swish!