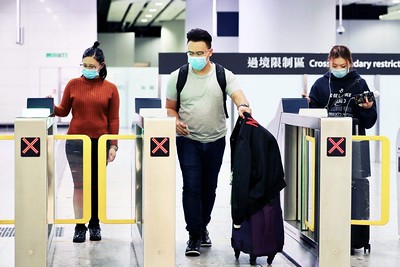 In Macau, hopes are high for a that individual travel from mainland China will resume in the next few weeks, possibly in conjunction with the National People’s Congress, which begins May 22.

Relief for Macau’s virus-ravaged casino industry could be on the way, according to a news report suggesting the Chinese government might resume granting visas for individual travel from the mainland this month.

The Macau government reportedly has been in talks with Beijing about reopening the borders, which effectively have been closed since late January to control the spread of the Covid-19 contagion. The virus was first identified in China in December.

Measures included suspension of the Individual Visit Scheme, or IVS as it’s known, which enables residents of dozens of select mainland cities to travel outside the country on their own without being part of a tour group. Developed in 2003 to boost the Hong Kong and Macau economies after the SARS epidemic, the IVS has since grown to become the largest and most lucrative source of gaming revenue for Macau’s casinos.

Over the previous three years, some 36 million mainland visits to Macau have been on IVS visas. Moreover, IVS travelers are known to stay longer and spend more.

Their absence, combined with the border control measures and various mandatory quarantines that largely have sealed Macau off both from China and Hong Kong, daily visitation has plunged from the hundreds of thousands to the hundreds, and on some days less than that.

Accordingly, the city’s world-leading gaming revenue, which last year surpassed US$36 billion, fell year on year by 60 percent in the first quarter and was down more than 90 percent in April.

At the same time, the aggressive response to the pandemic on the part of both China and Macau has borne success. Confirmed cases on the mainland have been held to under 90,000, according to official numbers, with fewer than 5,000 fatalities. In Macau, a densely populated city of more than 600,000, there have been fewer than 50 known infections, no deaths and no new confirmed cases in more than a month.

“I’m quite sure that the central government will allow the reissuance of (individual visas),” local political commentator Larry So told the English-language Macau Daily Times.

He believes this will coincide with the 13th National People’s Congress, which commences in Beijing on May 22 and lasts two weeks.

“We will have the IVS visitors coming in somewhere around the time the NPC meeting (ends),” he said.

That said, most experts believe its resumption, and how many cities might be included, will depend on whether the pandemic remains stabilized, and this is not a given by any means, according to the best medical evidence to date, which points to the strong possibility in many countries of recurring waves of infections.

No one, however, expects hat visitation levels will be returning to the levels of past years any time soon. Nor is it likely either that China’s virus-battered economy will be conducive to the levels of tourism spending seen in the past, at least not in the near term.

“We will not have the money that we did have in recent years because we know that the economic (situation) now in China is not so good. People do not have that kind of spare money to come and gamble,” So told the Times.

“The novel coronavirus has completely upended what we regarded before as normal. We now do not know what the new normal will be like,” said Leonardo Dioko, director of the Research Center of the Macao Institute for Tourism Studies.

In related news, the Macau Government Tourism Office (MGTO) says it has discarded the idea of introducing a tourist tax, citing the damage the Covid-19 pandemic has wrought on the local economy.

A statement from the agency cited by the English-language Macau Post Daily said the decision came after a “comprehensive assessment” of the findings of a feasibility study on the proposed tax as well as an evaluation of the effects of the pandemic on tourism, which have been severe.

The MGTO described the huge fall-off in visitor arrivals between January and March, a 92.5 percent decline, as a “massive blow.”

Gaming-related tourism is the principal engine of the local economy and the main source of public revenues, and “It has become a priority at this stage for the (government) to bolster recovery of the trade,” the agency said.

The idea of the tax was controversial from the start. Conceived as a means to mitigate some of the burdens that rapid and dramatic increases in annual visitation, mostly from mainland China, were imposing on local traffic and infrastructure, it drew mixed opinions. The feasibility study showed the public largely in favor of it but the business community mostly against it. Those mainland visitors polled also were overwhelmingly opposed.