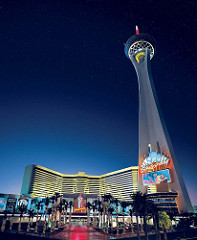 Golden Entertainment has a new name for Las Vegas’ Stratosphere to go with the $140 million in upgrades the company has committed to the 22-year-old resort.

The property famed for its 1,150-foot-high observation tower is going to be The STRAT Hotel, Casino and Skypod, a rebranding that is already being heavily marketed, starting with local TV commercials that aired during the Super Bowl as part of a “STRAT Rising” ad campaign designed “to get people excited about what is being done at the Stratosphere,” said Golden COO Steve Arcana.

Upgrades to all public spaces, including the casino floor, restaurants and entertainment, are expected to be completed by early next year, Arcana said. The hotel rooms are being remodeled in stages over the next few years.

Publicly traded, Las Vegas-based Golden (Nasdaq: GDEN), the largest operator of gaming taverns in Nevada, added the Las Vegas market to its growing casino portfolio in 2017 with the purchase of the Stratosphere and the city’s two Arizona Charlie’s casinos for $850 million in cash and stock.

The Stratosphere, the brainchild of maverick casino entrepreneur Bob Stupak, opened to acclaim in 1996 but has struggled to overcome its North Strip location on Las Vegas Boulevard. The property draws more than 1 million visitors a year, mostly to the tower’s observation deck on the 108th floor and the thrill rides just above it, but has had difficulty getting them to stay, play and eat.

Arcana said Golden found its new acquisition saddled with a “kind of outdated” look and feel and immediately sought to address it.

“The rebranding is designed to create an experience throughout the entire casino property including rooms, food and beverage, casino floor so that visitation becomes a little more sticky and the property keeps people around a little bit longer,” he said.

Upgrading the food and beverage offering was near the top of the list. A new menu has been introduced at the Top of the World restaurant, a new 24-hour cafe has been installed and a new restaurant has been added to the observation deck, 108 Eats by celebrity chef James Trees.

To coincide with NCAA basketball tournament, the property will unveil a new sports bar, BLVD Main Taphouse, and a cocktail lounge overlooking the casino floor.

The number of slot machines will be increased slightly to 765 and will be regularly refreshed with new offerings.

Since August, renovations have been completed on 310 of the Stratosphere’s 2,427, with work continuing on four to six floors, or roughly 240 to 350 rooms, a year.

“For years, the Stratosphere has served as a value dormitory for leisure customers,” said Macquarie gaming analyst Chad Beynon. “Now that Golden has applied some capital expenditure and significantly improved some of the room product along with internal concepts, we believe a rebranding and remarketing will drive solid returns.”