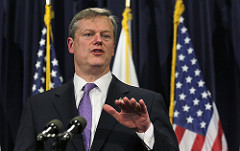 Bay State Governor Charlie Baker warned against “drawing too many conclusions” over the talks between MGM International and Wynn Resorts of the possible purchase by MGM of the half-completed $2.4 billion casino overlooking the Mystic River.

During an appearance at the State House he told reporters, “There are so many rumors out there right now about what’s going on with Wynn and MGM and Mohegan Sun and the Gaming Commission and all the rest, that I think we should all be careful about drawing too many conclusions about where this is or where it’s going.”

Baker noted that state law bans the same casino company from owning more than one property in the state. That means if MGM buys Boston Harbor, it would have to sell it quickly or divest itself of the $960 million MGM Springfield.

Baker noted that the Massachusetts Gaming Commission has the fate of the Boston Harbor in its hands. It is conducting an investigation of the company to determine if it was complicit in keeping the facts of former owner Steve Wynn’s $7 million settlement with a massage therapist who accused him of rape—as well as other accusations against Wynn—from the commission when it was determining Wynn’s suitability for a gaming license. Wynn has denied all allegations.

During the investigation commission Chairman Steven Crosby has been careful to tell the company’s representatives that it is proceeding “at risk” with the project.

Baker said the commission, and not he, has “far more information about what’s currently going on in those discussions than any of us do.” He expressed confidence that the commission would do the right thing once it wraps up the investigation.

That could come as early as this summer. Meanwhile Wynn is moving towards a June 2019 opening of the mega-casino.

Meantime the commission has declined to say how much it knows about talks between MGM and Wynn. Officials in Springfield are noticeably nervous about the possibility that the casino they have pinned their economic hopes on might suddenly be sold by MGM to allow it to purchase the Boston Harbor.