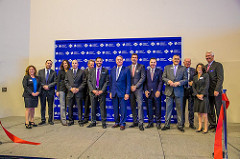 The awards were granted in a ceremony hosted by AGEM Executive Director Marcus Prater at G2E.

AGEM previously announced the creation of this unique annual awards program to acknowledge the lasting impacts on gaming by Halle and Mead, two distinctive industry veterans who died unexpectedly in 2015.

Now nearly four decades into a gaming career that started as a dealer in Atlantic City in 1979, Gros, 66, is the undisputed dean of North American gaming journalists. He started chronicling the gaming industry as a co-founder of Casino Journal magazine in 1983 as well as Casino Player magazine in 1988 that went on to become the leading source of information for casino visitors.

In 2002, he founded Global Gaming Business magazine, and has been publisher for the past 15 years for the leading trade publication that has the official endorsement of both AGEM and the American Gaming Association. His Casino Connection International company also publishes the Tribal Government Gaming, Casino Style and G2E Preview industry journals.

In addition, Gros is president of one of the leading marketing affiliates in the U.S. iGaming industry, iGamingPlayer.com. Gros also was a co-founder of the Southern Gaming Summit in Biloxi, Mississippi, and has organized hundreds of informative panel discussions for G2E, G2E Asia and other trade shows and conferences.

“Roger’s collective history and knowledge of the industry has been shaped by diverse and unique viewpoints that have made him one of gaming’s greatest communicators and steadfast supporters,” said Prater. “His written words and dedication to the trade journal and trade show segments of our industry have kept all of us informed and engaged as gaming has expanded globally over the past 30 years. He remains a go-to commentator for the mainstream media and supports gaming with a commitment to accuracy based on decades of experience and observation.”

Currently celebrating his 40th year in the gaming industry, Meitzler, 59, began his career as an assistant game designer for Bally Gaming in Chicago in 1977 and now serves as president and CEO of Novomatic Americas, a subsidiary of Austrian technology powerhouse Novomatic Group.

In his distinguished career with Bally spanning more than 33 years and dozens of jurisdictions around the world, Meitzler held more than 10 different positions, primarily in the areas of sales and customer service. In 2007, he assisted Australian company Ainsworth Game Technology’s U.S. entry as senior vice president of North American operations. Meitzler assumed his current position with Novomatic in 2015, and oversees a growing team dedicated to expanding the company’s overall presence in North America.

“How very deserving and appropriate it is for Rick Meitzler to receive this award named for his mentor and friend Jens Halle,” said Tom Nieman, president of AGEM. “If you read through the nominating criteria that captures the spirit of Jens and his career, you could just as easily be talking about Rick. He has succeeded in his career by taking care of his customers around the world with a smile on his face and a high level of integrity that makes him one of our industry’s most respected and popular figures.”

Current gaming professionals were nominated for these memorial awards based on the following criteria that aim to capture the unique attributes displayed by Halle and Mead during their storied careers: