Grudge Match to Poirer in UFC 264 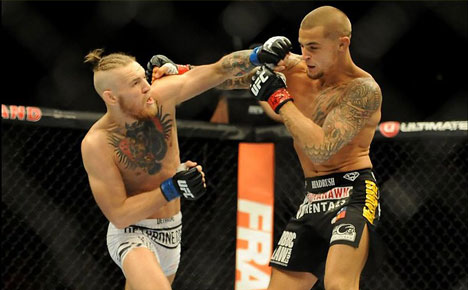 This is the one to watch at UFC 264 this Saturday: Dustin Poirer vs. Conor McGregor. The fighters have a contentious history—one TKO apiece in previous bouts—and serious scores to settle.

It’s the tiebreaker of the season this Saturday at UFC 264, from T-Mobile Arena in Las Vegas.

Meeting for the third time, Dustin (“The Diamond”) Poirer and Conor (“The Notorious”) McGregor have a contentious history, with one win each in two previous matches. No wonder this one’s a grudge match, with trash talk on both sides. In a press conference about the fight, the Irishman got up in Poirer’s grill, calling him a “hillbilly from the back-arse of nowhere.” He repeated the jibes in a recent Twitter rant, saying, “I’m coming for you, hillbilly.”

Poirer gave it all back and more, saying, “I want a blood-and-guts war. … Talk it up, say this, say that. Let’s find out who really wants to fight.”

The contenders first squared off in September 2014, at UFC 178; McGregor took that one with a first-round TKO. The two met again at UFC 257 in January, where Poirier evened the score. Delivering a second-round TKO at 2:32, he gave McGregor the first loss of his career.

McGregor has a lot to lose. Over the course of his career, he’s won UFC titles in the featherweight and lightweight classes, and in 2017, delivered a memorable “Rocky”-style assault in the boxing ring with Floyd Mayweather. McGregor dominated in the first seven rounds and stuck it out till Round 10, when the referee called the fight for Mayweather. Saturday’s fight will be McGregor’s third since losing the lightweight belt to Khabib Nurmagomedov at UFC 229 in October 2018.

Poirier is currently ranked No. 1 in the UFC lightweight rankings, and McGregor is at fifth. In this go-round, Poirer goes to UFC as a slight betting favorite.

UFC President Dana White has fanned the flames, telling ESPN that if McGregor beats Poirer in Vegas, “He’ll go down as one of the greatest of all time. … If he can beat Dustin Poirier, the No. 1 guy in the world, he can get a title shot.”

The winner of McGregor vs. Poirier 3 will almost certainly face off with UFC lightweight champion Charles Oliveira, who’s expected to be cageside this Saturday.

Sign up to wager at BetMGM.com, and place your first wager. If the bet loses, you’ll get back the amount of your wager in free bets, up to $600.

Here are the odds per BetMGM:

Register a new player account at WilliamHill.com. If you lose your first bet, you’ll earn a Free Bet of equal value up to $500!