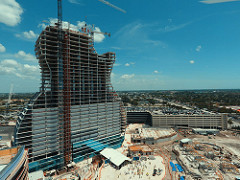 A topping-off ceremony recently took place at the Seminole Hard Rock Hotel & Casino in Hollywood, Florida, as the final structural beam was hoisted to the top of the guitar-shaped, 450 foot tall structure. The beam, adorned with the flags of the U.S., Florida and the Seminole Tribe of Florida and a small tree, was signed by tribal members and construction workers. The hotel is part of a $1.5 billion complex under construction at the tribe’s flagship Hollywood property.

Expected to open in fall 2019, the property, visible for miles from locations around Broward and Miami-Dade counties, will offer 638 hotel rooms in the guitar tower plus 168 rooms in the pool tower overlooking a private cabana area. A 10-acre lagoon-style pool will offer Bora Bora-style cabanas in the center with private plunge-pool access and butler service. Paddleboarding and other water sports activities, a day club and private pool area also will be offered.

In addition, there will be 30 new restaurants, lounges and bars, a new 41,000 square foot Rock Spa, 21,000 square feet of new retail space and a 120,000 square foot meeting and convention area. A new 6,500-seat Hard Rock Live concert venue will have its own television studio and broadcast center capable of hosting awards shows and other events.

Hard Rock International Chief Executive Officer James Allen said the hotel created about 2,000 construction jobs and is expected to require 2,000 more employees. “People tell me, ‘You’re a little crazy to build a hotel in the shape of a guitar.’ We are overwhelmed with the warm reception we’ve received about how amazing this building is here in South Florida. We truly think this becomes a reason to come to South Florida, not just for the purpose of gaming but to see the world’s only to-scale guitar-shaped hotel.”

He continued, “There is no other brand—none, zero in hospitality—that has a presence in 75 countries around the world. But at the same time, it’s the history of the tribe and its culture and sovereignty.”

Allen added Hard Rock will build a second guitar-shaped hotel in Barcelona, Spain and two more are in the planning stage, including one in Japan.