HomePost TimeGulfstream, Oaklawn and Fair Grounds Have an Exciting Lineup of Races Ahead

Gulfstream, Oaklawn and Fair Grounds Have an Exciting Lineup of Races Ahead 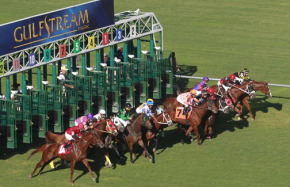 Life by the numbers.

Gulfstream Park offers a Rainbow Pick 6 Carryover of nearly $1.4 million entering the March 13 race week. As the last couple weeks of the championship season dawns, along with the Florida Derby on March 30, look for heavy action and handsome payouts here.

Oaklawn Park in Hot Springs, Arkansas, commands the racing world March 16 with the $1 million Rebel Stakes. It is one of the track’s three major days of the year, and it will add the $350,000 Azeri and $300,00 Essex races. The Rebel, along with the April 14 Arkansas Derby, brings Kentucky Derby-style attention to Oaklawn.

And this year, the spotlight grows. Hall of Fame racehorse trainer Bob Baffert will bring two highly heralded prospects, Game Winner and Improbable, to the Rebel Stakes. They were scheduled to run in the San Felipe at Santa Anita in California, but racing has been suspended there because of poor track conditions, following the death of 21 horses there since December, reportedly caused by an uneven training surface. The track is scheduled to stay dark until at least the weekend of March 22.

In the interim, California horses are shipping to the Midwest and East.

See what a casino does for a racetrack? Makes you a player.

March Madness Is Just Around the Corner

There’s usually a notable upset in the opening two rounds, so here are some stats to ponder:

First rounds are often cakewalks for the elite teams. Second-round play will have some “upsets” that aren’t major because by then we’re down to the final 32 teams in the country, so watch for some sharp line movements. Over the last three years the eventual national champions are a combined 18-0 against the spread in the NCAA Tournament and 26-4 in the last five years.