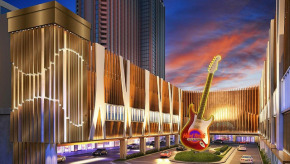 The highly anticipated Hard Rock Hotel & Casino Atlantic City has set June 28 as its grand opening date. The announcement of the completion of the transformation of the bones of the former Trump Taj Mahal into the new Hard Rock property was made by Jim Allen, chairman and CEO of Hard Rock International, at a simulcast three-city press conference last week.

Allen conducted the conference from New York’s Hard Rock Café in Times Square, appearing in a video simulcast in Atlantic City and Philadelphia. He reflected on his first meeting with his partner in the project, New Jersey developer Jack Morris, when the two considered the Atlantic City market. “The question was, can Atlantic City take the next step? We were 100 percent convinced that it can.”

Hard Rock put its own substantial resources behind that bet—after purchasing the shuttered Taj Mahal out of bankruptcy from Carl Icahn for $50 million, the operator pumped nearly 10 times that into the project, spending nearly $500 million to create a totally new property on the bones of the Taj. “We wanted to make sure we built something world-class,” Allen said. “We come back to Atlantic City with the idea of growing the market… We certainly had nothing but a welcome mat to create these 3,000 jobs, an expanding tax base and an economic boost.”

Allen justified the expense by noting that the Atlantic City market has already defied all odds with three straight years of growth, including a 22 percent increase last year. “They were actually predicting the opposite,” he said of industry pundits. “They were actually projecting that by this year, the market would be less than $2 billion. It’s actually at $2.7 billion, and it is still the second-largest gaming market in the United States.”

The Hard Rock Hotel & Casino Atlantic City will bear absolutely no resemblance to the former resident of its 17 acres on the Atlantic City Boardwalk. The former Taj was gutted and stripped to its frame, its rooms not even using any of the former fixtures or plumbing. Standard rooms with Hard Rock’s signature “Sleep Like a Rock” bedding and “Rock Spa” bath products will feature Boardwalk and ocean views, with four different styles of suites offering panoramic views from floor-to-ceiling windows.

The 167,000-square-foot casino will be more akin to Las Vegas mega-resorts than anything in Atlantic City, including a marble pathway throughout the gaming floor and, of course, Hard Rock’s signature rock memorabilia spread amid the 2,100 slot machines and 120 table games.

But according to Allen, the casino is not the main draw of the new property. Hard Rock Atlantic City, he said, will be more about entertainment than anything else. The expanded former Mark G. Etess Arena—named for the late Trump marketing executive who died in a 1989 helicopter crash—will now accommodate 7,000 seats (the space formerly seated fewer than 6,000), and will be known as Hard Rock Live at Etess Arena. (Allen said he personally called Etess’ brother, Mohegan’s Mitchell Etess, to tell him his brother’s name will be retained on the venue.)

Additionally, the property will feature a separate 2,000-seat venue, yet to be named, built on the frame of a facility that was rarely used by the Taj, as well as the central Hard Rock Café, which will feature an enlarged stage.

“Hard Rock is not about gaming; it’s about entertainment,” Allen said at the three-city press event. “The Hard Rock brand is not a gaming brand. The name of the company is Seminole Hard Rock Entertainment.”

Allen said tickets for 60 entertainment acts at the Hard Rock went on sale Friday, and so far, the operator has booked more than 300 shows. “When’s the last time any individual property, whether it be in Macau, Singapore or Las Vegas, booked 300 acts in one year? It shows the commitment that we, as an entertainment brand, as a hospitality brand, have made to the city of Atlantic City.”

In addition to music of every genre, the new property will feature the Howie Mandel Comedy Club, with periodic performances by its namesake as well as stars from across the comedy spectrum.

“The Grand Opening of Hard Rock Hotel & Casino Atlantic City will set the tone for a new era of entertainment in Atlantic City,” Allen said. “Our $500 million, newly reimagined property will offer something for everyone, and we’re thrilled to welcome our first guests in June.”

He added that the debut of the Hard Rock may inject new energy into the entire industry. “We are very excited that the other casinos in Atlantic City are reinvesting in their product,” he said.