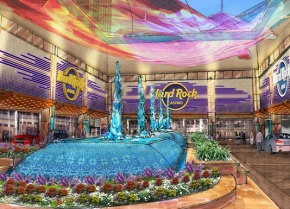 Hard Rock Atlantic City—which is scheduled to open this summer on Atlantic City’s Boardwalk—has been making an effort to engage the resort’s largely minority community through hiring programs and other forms of outreach.

The city’s predominantly black community has long felt excluded from the economic benefits casino gambling has brought to the region.

Hard Rock officials, however, have begun holding community meetings—scheduled to be held every three months—for residents in the area around the casino and implemented programs to hire more locals for casino jobs.

The casino has also announced programs to train local youth children for careers in the industry, set aside free or discounted concert tickets for city residents and hire people who graduate from a drug offense court diversion and treatment program.

More than 100 people attended an initial community meeting with the company’s top management and discovered they will receive free coffee for the rest of the year once the casino opens, according to a report by the Associated Press.

“It’s extremely important to dispel the perception of the casinos living on their own island, isolated from the community,” said Jim Allen, CEO of Hard Rock International. “We want to reach out to our neighbors and make sure they know who we are. We believe it’s important to make sure there’s a true partnership.”

For many Atlantic City residents, there has been a perception that casinos in the resort care only about their own bottom lines and not in benefitting the community as a whole.

“There was a time when the casino industry, our primary industry, was isolated from the community,” said Bishop James Washington, of the New Shiloh Baptist Church, which hosted the meeting with Hard Rock. “Each one was concerned about their individual business interest. The interest of the community may have been secondary. What Hard Rock i s doing is fantastic. They’re looking to invest in our community and opening their property and giving employment to people.”

Hard Rock, its local investors and a community group have started a program to train young city residents for careers in the construction trades. Hard Rock is also in the process of hiring a needed 3,000 employees for its opening, which is now slated for June.

Allen is also proposing a citywide program in which executives from each Atlantic City casino would staff and fund a program to train high school students for careers in their city’s main industry.

“We want to create a curriculum to teach your children the business, just like I learned it,” Allen told residents. “We have to teach people the business from the ground up. There’s a way to clean a room and deal cards and greet a guest.

“Give us a chance,” Allen asked residents. “We have to make money. There can’t be animosity if the casino makes money. But we have to give back.”

The meeting also underscores how the Hard Rock, along with the neighboring Ocean Resort—scheduled to also open this summer on the site of the former Revel casino—will have to complete hiring in time for their announced openings. The Ocean Resort also needs to hire about 3,000 people.

The New Jersey Division of Gaming Enforcement has been working with both properties.

“The division is working closely with both operators as they go through the regulatory process in preparation for the expected casino openings this year,” David Rebuck, director of the DGE said in a press statement. “This includes actively working on licensing matters as well as ensuring operational systems such as floor layouts, gaming equipment, security, surveillance and staffing meet our regulatory standards.”