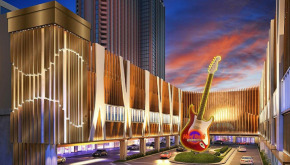 Hard Rock Atlantic City has received licensing by the New Jersey Casino Commission to re-open the former Trump Taj Mahal casino, keeping it on track for and announced June 28 opening.

The neighboring Ocean Resort—formerly the failed Revel casino—has also targeted June 28 as an opening date. Combined, the two projects will restore as many as 6,500 of the 11,000 jobs Atlantic City lost when five of its 12 casinos went out of business since 2014, according to an analysis by the Associated Press. Those closings included the Revel and Taj Mahal.

“What we have in store is going to blow people away,” said Jon Lucas, chief operating officer of Hard Rock International. “It’ll be a boost for the reinvention of Atlantic City.”

About 23 executive members of the casino were also approved for key casino employee licenses before the commission. Several of the casino’s top-level executives, including Hard Rock International Chairman Jim Allen, property President Matt Harkness and principle investors Joseph Jingoli and Jack Morris were present for license hearings, according to local reports.

The licensing was helped by Hard Rock’s previous interest in building a casino in the resort in 2015, which led to the issuing of a statement of compliance—a preliminary step in the licensing procedure. The Hard Rock never went forward with its earlier plan to build a $465 casino project in the city.

Hard Rock, however, has completely transformed Donald Trump’s former Indian-themed casino which opened in 1990 in a reported $500 million refurbishment.

“We could have just re-carpeted and put up some memorabilia. But we want to grow Atlantic City rather than just moving people from an existing facility,” James Allen, CEO of Hard Rock International told the commission.

The property recently saw the installation of Hard Rock signs around the facility and officials also announced the hiring of its 3,000th employee. Atlantic City native Leonard Coleman, 54, was the announced as the 3,000th employee, and will begin as a Craps Dealer, according to local reports. Hard Rock officials said they still have about 500 open positions to fill at the casino.

The Hard Rock is putting a strong emphasis on live entertainment unveiling a $30 million entertainment budget for the property’s first year that includes more than 300 nights of live music, comedy and drama. Some announced headliners to open the schedule include Carrie Underwood (June 29) and Pitbull (June 30).

The Hard Rock also opens with no debt having been self-financed by Hard Rock International and its local investment partners, Allen said. The casino also plans to enter the New Jersey online gambling market and offer sports betting if the U.S. Supreme Court upholds New Jersey’s challenge of a federal sports betting ban.

Meanwhile, Ocean Resort officials have confirmed that the casino at the former Revel property will also open June 28.

In a statement to the local Press of Atlantic City, Ocean Resort CEO Frank Leone said June 28 will be a “culmination of all of our planning and know that this will be a special day for Atlantic City as it turns the page on a new chapter of revitalization.”

Ocean Resort, however, still has to receive casino licensing in the state.

The 6.4 million-square-foot Ocean Resort has been undergoing renovations since the property was purchased for $200 million in January from Glenn Straub’s Polo North Country Club Inc. Casino officials say the refurbishment has created 300 construction jobs and related positions at more than 90 local companies. When it opens, the casino expects to create 3,200 full-time jobs.

The property will include a 138,000-square-foot casino, 160,000 square feet of indoor meeting and convention space, 90,000 square feet of flexible outdoor special-event space and six swimming pools, including a saltwater pool and an ocean-facing sun deck with luxury cabanas, according to the Press.

“Our team has been working diligently since we acquired the property in January and have put a great deal of time and effort into creating a truly unique and memorable destination guest experience,” said Bruce Deifik, chairman of AC Ocean Walk, which owns the casino-hotel in a press release.

In another good sign for the area, a stretch of Atlantic City’s Boardwalk that connects the north Boardwalk with the city’s inlet section has recently been refurbished. The section opened after months of construction that’s been part of a $50 million project expected to extend the walking path to the inlet park at Gardner’s Basin.

Meanwhile, the Borgata Atlantic City—the resort’s market leader—has announced some counter-programming for its marina-based casino as it prepares to celebrate its 15th anniversary.

The casino announced it has booked Dave Chappelle, Cher and Barry Manilow to be part of its celebration this summer.

“As Borgata celebrates 15 years as both leaders and innovators in the Atlantic City market, we are excited to present an entire summer of programming that truly encapsulates what makes Borgata the pre-eminent travel destination on the East Coast,” said Marcus Glover, president and chief operating officer for Borgata in a press release. “Since entering the market in 2003, Borgata has made it our mission to grow and invest in not only our property and product, but our team members and guests; offering an unrivaled experience to anyone who walks through our doors.”