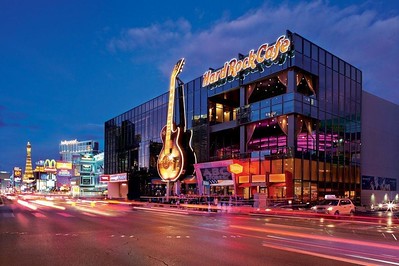 Hard Rock International’s acquisition of the name “Hard Rock Las Vegas” positions the gaming powerhouse for expansion into the city. The timing could be just right, with some of Caesars’ and possibly MGM’s Strip properties expected to hit the market soon. Hard Rock currently operates a Hard Rock Café (l.) on the Las Vegas Strip.

Hard Rock International (HRI) has purchased the Hard Rock Las Vegas name and the intellectual property rights associated with it, paving the way for a possible revival of the iconic brand as a Las Vegas gaming resort.

Jim Allen, HRI chairman and CEO of Seminole Gaming, indicated the company views the purchase as a springboard for expanding the tribe’s empire to Las Vegas, which was home to the original Hard Rock casino.

“This agreement marks an exciting chapter for Hard Rock, in Las Vegas and beyond,” he said. “We look forward to the opportunity of enhancing our presence in Las Vegas, which will always be one of the most iconic entertainment markets in the world.”

HRI is looking at Las Vegas at what could be an especially propitious time, with Eldorado Resorts expected to shop some of Caesars’ eight Strip resorts, and real estate investment trust Gaming and Leisure Properties reportedly looking to sell the Tropicana. With the city and its No. 1 industry laid low by the Covid-19 pandemic, it’s possible Hard Rock will be walking into a number of favorable scenarios in terms of valuations.

“The Hard Rock brand is about as iconic as it gets, and its mark on the Las Vegas landscape is indelible,” Josh Swissman of the Strategy Organization told industry newsletter CDC Gaming Reports. “You couple that with a sharp management team and what could be reasonably priced Strip assets for sale in the near future and you have and you have a compelling case to bring back the casino brand that paved the way for catering to a coveted younger demographic. They likely have the balance sheet to pull this off as well.”

The Seminoles have owned the name and the assets of Hard Rock’s gaming, hotel, restaurant and retail holdings outside Las Vegas since 2007, a constantly expanding portfolio that currently stretches across 74 countries and encompasses casinos in Tampa and Hollywood, Fla.; Biloxi; Lake Tahoe; Sacramento, Calif.; Sioux City, Iowa; Tulsa, Okla. and most recently in Atlantic City with the 2017 purchase and rebranding of the shuttered Trump Taj Mahal. HRI also owns casinos in Ottawa and Vancouver and Punta Cana In the Dominican Republic.

The original Las Vegas Hard Rock was a groundbreaking venture when Hard Rock co-founder Peter Morton opened it in 1995 just east of the Strip on Harmon Avenue𑁋the first casino to specifically target a younger demographic with a fully themed rock ‘n’ roll ambience.

Morton later sold off most of the company, with the majority of the international assets winding up in the hands of UK media and gaming giant Rank Group, and thence to the Seminoles, and the 1,500-room Las Vegas Hard Rock landing in 2006 with Morgans Hotel Group, which sold it in 2011 to partner Brookfield Asset Management.

From Brookfield it went to its current owners, a joint venture between Juniper Capital and Richard Branson’s Virgin Group, which purchased it in 2018 for $500 million and closed it for conversion to a Virgin-branded hotel slated to debut later this year with a casino operated by Connecticut’s Mohegan Indian Tribe.