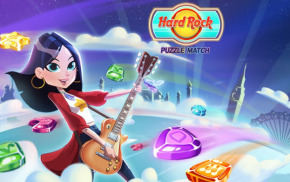 The game launched on August 31 and is available on iOS and Android.

“It is one more brand moving into mobile games, which has become a $46 billion industry,” Venture Beat reports.

Orlando, Florida-based Hard Rock International considers Puzzle Match to be the first release in a multi-year, multi-title effort to break into games, said Kresimir Spajic, the senior vice president of online gaming at Hard Rock, in the report.

“Hard Rock International is continuously searching for opportunities to increase brand affiliation among its loyal fans,” he said. “This highly engaging game will provide users a one-of-a-kind experience, just like they’d receive by stepping foot onto any Hard Rock property, whether it be a hotel, casino, café, or Hard Rock Live venue.”

Hard Rock Puzzle Match lets players work their way through various levels and puzzles to add to their Hard Rock memorabilia collections, while exploring famous Hard Rock landmarks and locations: London, Las Vegas, New Delhi and Barcelona. Each city features a special set of cards, so players can learn about each location.

Israel-based Ilyon Dynamics, founded in 2013, has created more than 50 free-to-play casual mobile games with hundreds of millions of downloads.

“Hard Rock appeals to a wide audience through its differentiator—music,” Spajic said. “By targeting the brand’s millions of loyal fans from around the world, we hope to create a bridge between the online and offline experiences. As a leading entertainment and leisure company, Hard Rock is known for delivering guests a one-of-a-kind, immersive experience as soon as they enter a Hard Rock location, and this game captures that experience and puts it in the palm of players’ hands.”