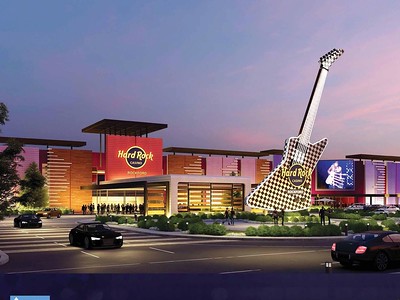 Fifty-three investors in a proposed $311 million Hard Rock casino in Rockford, Illinois electronically submitted 10,000 pages of documents to the Illinois Gaming Board to apply for a gaming license, plus a $250,000 application fee and $50,000 background check fee. Investors include Dan Fischer, owner of Dotty's gambling cafes and Cheap Trick lead guitarist Rick Nielsen.

On the October 25 deadline, representatives of the proposed $311 million Hard Rock Casino Rockford in Rockford, Illinois and its 53-member investor group submitted documents to the Illinois Gaming Board to apply for the license to operate a casino at East State Street near Interstate 90. The state has one year to approve the application; 10 have been submitted for six licenses in the south Chicago suburbs and one in the city of Chicago.

Rock legend Nielsen said, “It’s going to bring a lot more people to town. We’re not just hoping to have all local people. It’s going to be people we’ve never met before, good ones, and a lot of them.”

Another investor is Rockford obstetrician and gynecologist Dr. William Cunningham Jr., who said he wiped out his retirement savings to invest in the project. He took the risk because the venue will benefit the city by creating 1,200 construction jobs and 1,000 permanent casino jobs, he said. “They can give you predictions about the return on investment, but there is no guarantee, and I recognize that. Any opportunity to bring business to Rockford and provide people with good-paying jobs is a good thing for the community in my eyes.”

The Hard Rock proposal includes a 65,000-square-foot casino with 1,500 slots and 55 table games, a Hard Rock Café and 1,600-seat Hard Rock Live venue, plus three restaurants, two cafes and a sportsbook. A 225-room hotel will be added in the next phase of development.

Meanwhile, Country Club Hills has joined five other communities to apply for a casino license following the demise of a proposed Tinley Park racino. Country Club Hills Mayor James Ford said, “When the racino got pulled off the table, we decided to go for the casino. We weren’t going to go for it if the racino was going to happen in Tinley Park, with us being next door.”

The racino seemed likely to win Illinois Racing Board approval, but Governor J.B. Pritzker’s administration announced it wouldn’t sell the land for the project to the development group, led by video gambling magnate Rick Heidner. Heidner had been connected to a corruption investigation including federal search warrants for the offices of state Senator Martin Sandoval and McCook Mayor Jeffrey Tobolski.

The Country Club Hills site is less than five miles from the proposed Tinley Park racino. “We’ve been down this road before. Our land is totally undeveloped. It’s there, and we’re ready to go,” Ford said.