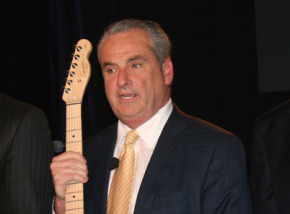 “The building is tired,” Allen told the conference. “When we first bought it, we thought we would spend $350 million, then it became $375 million, then it became $400 million. We are now committed to putting a minimum of $500 million into that building. It does us no good to put some guitars on the wall and new carpets, and say, ‘I can take 5 or 10 percent of the business from Resorts or Harrah’s.”

The remarks were made as Allen gave the keynote address to the East Coast Gaming Congress at Harrah’s Atlantic City.

Hard Rock intends to open two separate arenas at the property with seating totaling 7,000 at the property as well as more than 2,400 slot machines. It is expected to open in summer 2018.

But part of the increase stems from trying to remove signs of President Donald Trump’s vision of the property. Trump originally opened the casino in 1990.

“It’s everywhere,” Allen said of Trump’s influence on the Indian palace-themed Taj Mahal. “The amount of money we’re going to have to spend to remove all those minarets and all that purple. Jesus! What were we thinking?”

Hard Rock led a group of investors that paid $50 million to purchase the property from billionaire Carl Icahn.

Allen also said that he has already met with casino union representatives in Atlantic City and promised to sign a contract with the union. Icahn closed the property after failing to resolve a bitter strike by Unite HERE of local 54, the city’s main casino union.

“There’s going to be no dispute with Local 54,” Allen said. “We are going to put people back to work. We’ll get it done. We’ll do it fair.”

Allen said he believed in Atlantic City’s future and said the city maintains a competitive advantage over casinos in surrounding states due to its low tax rate.

“Has anybody walked the casinos in Pennsylvania lately?” he asked. “It’s hard to reinvest in a building when you’re paying 45-50 percent of your revenue to the state.”

In another matter, Meadowlands operator Jeff Gural also spoke at the conference and said that a proposal to have Hard Rock International build a casino at the track in East Rutherford can wait as long as six years—time enough for New York state to open three more casinos.

A proposal to allow two new casinos in northern New Jersey—with the Meadowlands as a lead contender—was overwhelmingly defeated by state voters in November. Gural said he would rather wait until a referendum has a strong chance of passing rather than rushing a new referendum before voters.

“I can last as long as it’s going to take,” Gural said. “I’d rather wait six years until New York is either open or ready to open, and then voters will say, ‘Wait a minute.'”