Hard Rock’s Allen Says ‘The Fix Is In’ 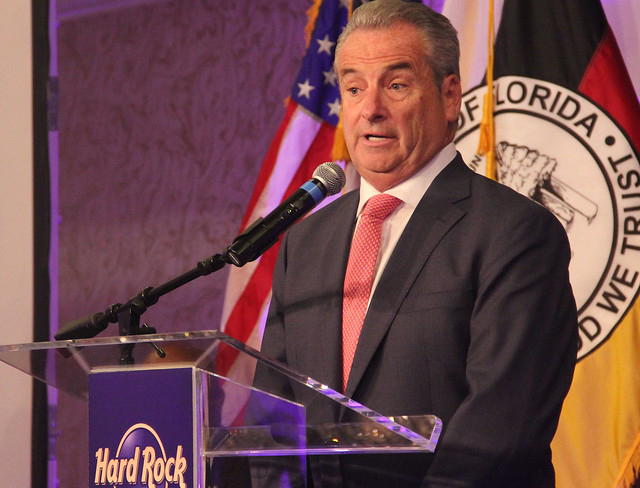 Hard Rock International Chairman and CEO James Allen (l.) last week disputed reports that Mohegan Gaming & Entertainment had been awarded the license to build and operate an integrated resort at the former Hellinikon International Airport near Athens. He conceded that Hard Rock had received a letter of disqualification for its IR, but said the “fix is in.”

Reports that Mohegan Gaming & Entertainment has been awarded the right to develop an integrated resort on the site of the former Hellenikon International Airport near Athens were premature, according to Jim Allen, the chairman and CEO of Hard Rock International, the only other competitor still participating in the process.

In an exclusive interview with GGB News, Allen said that the appeals process is ongoing. “Mohegan hasn’t been officially awarded the license because the appeal process needs to be completed. The government has yet to open the technical and financial offers. So no one, in fairness to Mohegan, has been confirmed as the winner at this time.”

Allen agrees that Hard Rock received a letter from the Greek government disqualifying his company for several reasons, all of which are very questionable, according to Allen. One of those reasons was a lack of financial viability. Allen takes exception to that.

“We have the strongest financial balance sheet in the industry,” he insists. “We’re the first gaming company to achieve and maintain an investment grade rating from Moody’s, Standard & Poors and Fitch. Bank of America supplied a highly confident letter supporting our ability to finance this project, and with our group of companies being one of the lowest leveraged in the industry, we find it difficult to believe that Bank of America’s recommendation was insufficient.”

Hard Rock was also accused of allowing their bank guarantee to lapse, but Allen says it was Hard Rock that caught that, not the Hellenic Gaming Commission (HGC).

“The Hellenic Gaming Commission and the group administering the tender were inconsistent in the reporting of their requirements related to the bank guarantee dates,” he says. “Our guarantee as signed with Bank of America was valid to a date that exceeded the tender requirements of one year but when issued by the National Bank of Greece, it was issued with a date that was four days short of the requirement. The bank guarantee also allowed for extensions at our request, so we had National Bank of Greece extend the guarantee and then advised the Committee and the Gaming Commission of the extension and the inconsistencies in their virtual data room.”

As for the lack of development experience cited in the letter, Allen just laughed.

“In my career, I have developed over 150 hotels, casinos and restaurants,” he says. “I have raised billions of dollars for development projects all over the world. The Hard Rock brand has more than doubled under our leadership, so to suggest that we do not have the experience; it just validates the corruption in the process.”

Allen said if Hard Rock had lost the bid because the competition’s financial offer was greater or that Hard Rock had not proposed as large of a facility, he would have accepted that result, but they didn’t, and they haven’t even opened up those sections of the document yet.

“You’ll never hear Jim Allen say anything negative about a process like this as long as it’s fair,” he says. “This was not fair right from the start.”

Allen points to Mohegan’s local partner, Gek Terna, and the law firm who represents them, as the main culprits.

“Mohegan’s partner was convicted of participation in a price-fixing cartel, and these convictions were not disclosed in the application even though it was legally required,” he says. “I’ve been licensed in countless jurisdictions—I got my first key license in 1981—and I know that withholding information like that would be grounds for immediate disqualification in every one of them.”

Allen also contends the fix was in because of the close relationship between the partner’s law firm, the Tender Review Committee and the HGC.

“KLC, the law firm that has been representing Mohegan’s partner for the last 10 years, is the same law firm advising the Committee and the Commission on our disqualification,” he claims. “They claim there is no conflict. Come on.”

In addition to those problems, Allen cites Mohegan’s regulatory problems in Pennsylvania.

“The Mohegan Sun Pocono is the entity with the most fines in Pennsylvania gaming history,” he says, “$1.8 million. No one even comes close to that and there were allegations of money laundering and other crimes. And none of that was disclosed on the application either when there were questions specifically requesting such information. Another reason for automatic disqualification.”

Allen says Hard Rock has already filed their appeal and despite the odds he holds out hope for a successful appeals process.

“One of the ministers issued a statement that our appeal won’t matter, even before our appeal had been filed,” he says. “They didn’t even know what we were planning to appeal. He basically stated that it’s predetermined that the appellate process will still be in Mohegan’s favor. So one has to ask, if you’ve already made up your mind that you’re not going to listen to any of our issues before you’ve even read them, then how is that a fair process?

“Our hope is that the Prime Minister and other officials were not aware or involved in this situation and that Prime Minister Mitsotakis and the Parliament will make the appropriate corrections to ensure a fair process.”

At the other end of the Mediterranean Sea, Hard Rock is the developer and operator for an integrated resort in Catalonia and was granted a license, however, political changes have delayed the process but Allen says now its back on track.

“We are targeting a March deadline and we are still navigating forward in that process. We’re not there 100 percent yet, but we should have an updated announcement sometime in the middle of March.”

In Vegas, Success Be