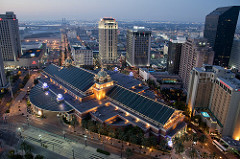 Representatives of Caesar’s Entertainment have testified before Louisiana’s Riverboat Economic Development and Gaming Task Force that New Orleans’ 2-year-old smoking ban has cost the company’s casino in the city upwards of $70 million in revenue.

Caesars President and CEO Mark Frissora told the panel the ban makes it difficult for the downtown Harrah’s Casino & Hotel to compete with venues in the surrounding area because it only affects Orleans Parish.

“It’s not fair because everyone else around us doesn’t have the smoking ban,” he said.

When the smoking ban went into effect in New Orleans in April 2015, the company’s regional operations were coming off their best quarter in history. Then the ban “hit,” as Caesars’ Southern Division President Dan Real put it

“I’m not a scientist,” Jones said. “But I think the smoking ban had an impact.”

Real agreed. “There was an absolute correlation,”

He said, however, that he is optimistic that the November opening of a smoker-friendly courtyard of 63 slot machines will be successful. He said two more are slated to open this summer.

“Sixty-three slot machines will never make up for the gap that’s been created, but that’s one example of multiple things we’re trying to do to fill the funnel which has been left void,” he said.

Caesars told the Task Force that its Bossier City and New Orleans locations have collectively contributed $2.3 billion to the state in gaming tax revenues. The two also have contributed $52.3 million in other state and local tax fees and $344.5 million in salaries and wages between 2013 and 2016.