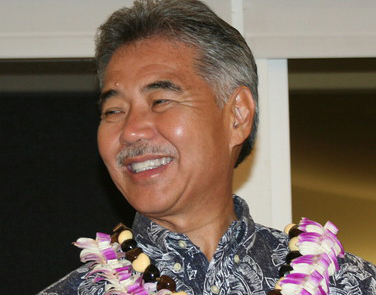 Hawaii Governor David Ige (l.) has vowed to fight a proposal to build a casino on Oahu on land earmarked for Native Hawaiians. The proposal originated with the Hawaiian Homes Commission.

Hawaii Governor David Ige opposes a proposal by the Hawaiian Homes Commission to build a casino in the town of Kapolei on the island of Oahu, on lands set aside for Native Hawaiians.

During a radio interview Ige declared, “The benefits (of a casino) would not exceed the social costs of gambling,” adding “It does not provide economic value to our community.”

The 203,000-acre Department of Hawaiian Homelands (DHHL) land trust for Native Hawaiians was created during the administration of President Warren Harding 100 years ago.

DHHL Deputy Chairman Tyler Gomes last week told an interviewer on Facebook that the casino would offer “an opportunity to have a conversation about a number of shortfalls the department faces.”

He said that a “conservative” estimate of the possible revenues for such a casino are $30 million annually. The department could use these funds for a long list of Native people waiting for homesteads on the land.”

Gomes declared, “I know there are people who have been waiting at least 30 years. But I think the bigger number and the more troubling number for the department is the estimation that if we continue producing homes and lots at the rate that we currently are — and assuming that no one is going to join the wait list after today, which we know is not going to happen — at that rate it would take us 182 years to address the wait list at the current funding level.”

He said the department needs $140 million to operate, and received about $20 million from the legislature last year.

During that same Facebook streaming show, Gomes was criticized by viewers, one of whom called the DHHL, “the Department of Homeless Hawaiians,” while another added, “So sad that some people would come to the most beautiful place on earth to stay inside and roll some dice.”

The proposal is also giving heartburn to some Las Vegas interests who would prefer that Hawaiians travel to Nevada to do their gambling. Many thousands of tourists from the Aloha state come to Nevada annually because it is one of only two states that completely ban gaming.

If approved, the measure would impose a 45 percent tax on lost wagers, with the DHHL getting 80 percent of that.

Las Vegas is still struggling to preserve its tourist industry, which has been close to being shattered by the pandemic. Some casinos are offering testing sites that meet the rigorous standards of Hawaii’s Safe Travel requirements.