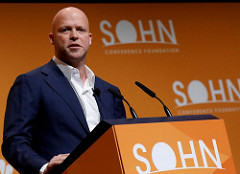 MGM Resorts International has bowed to a growing contingent of activist investors with an agreement to appoint hedge fund boss Keith Meister, a protégé of Carl Icahn’s, to the board of directors.

Meister, whose New York-based Corvex Management owns roughly 3 percent of the Las Vegas-based gaming giant, was expected to join the board last week, expanding its size to 13 directors.

The timing of his appointment appears linked to a Reuters report that hedge fund Starboard Value, led by Jeffrey Smith, is also building a position in MGM and is considering pushing for changes.

Corvex owned less than 1 percent of MGM as of September 30, implying it bought about $300 million worth of the company’s stock since October.

Meister founded Corvex in 2010 after working for Icahn and had been described as the financier’s right-hand man. He has a history of seeking changes at companies he invests in, including fast food operator YUM! Brands, where he served as a director, and oil producer Energen. He also has sat on the board of the Williams Companies, among others.

“As a significant shareholder in our company, we have been engaged in constructive dialogue over the last several months,’’ MGM Chairman and CEO James Murren said of Meister, adding that management’s strategy is “aligned’’ with Corvex.

Earlier this month, MGM released a blueprint for boosting EBITDA by centralizing operations, investing in technology and cutting costs—including shaving around 2,000 jobs—moves the company says will boost annual cash flow by $300 million by the end of 2021.

Over the last several years, the company has invested some $6 billion to build three new casinos and another $650 million to revamp and rebrand the Monte Carlo on the Las Vegas Strip as Park MGM. Those projects are expected to contribute to lifting operating cash flow to as high as $3.9 billion by 2020, according to news reports, an increase of more than one-third compared with 2017. It would be one of the best growth rates in the industry and would enable MGM to return more cash to investors while also paying down debt.

“But,” as Jefferies gaming analyst David Katz put it, “the stock would tell you they have more to do.”

As for MGM, excluding its majority stakes in Macau operator MGM China and real estate investment trust MGM Growth Properties, the company’s domestic operations are valued at only about eight times 2019 operating cash flow. That is a 25 percent discount to recent industry acquisition prices of 10 times, according to JPMorgan.

“They are feeling some pressure from investors to have their stock work a little better,” Katz said. “They are starting to hear it.”