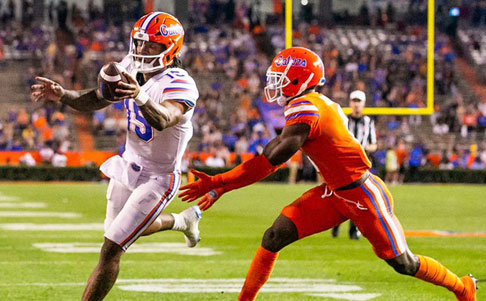 The Heisman Trophy is College Football’s oldest and most prestigious awards, and the odds for the honor have been released by BetMGM.

The Heisman Trophy is college football’s most prestigious award. Handed out every year to the most outstanding college player, there has been a recipient since 1935, making it college sports’ oldest honor.

Quarterbacks have dominated the award. Since 2010 a QB has won every year but two. Wide receiver DeVonta Smith won in 2020 and running back Derrick Henry won in 2015.

College football betting experts Matthew Horner and Dan Karpuc of BetQL, take a look at this year’s odds and give advice on wagers bettors should be making.

Anthony Richardson’s big-play ability was on display as a part-time player last season for the Florida Gators. He went 38-for-64 (59.4%) passing for 529 yards with six touchdowns and five interceptions, but also added 401 yards on 51 carries (7.9 yards per carry) with three more scores on the ground.

Expect new head coach Billy Napier to unleash the explosive athlete, who should be able to put up some crazy numbers, both as a passer and a runner. As we’ve seen in the past, that’s a fantastic recipe to win this award. 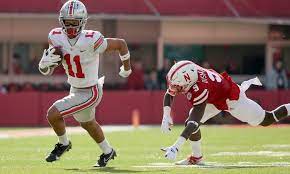 Ohio State Buckeyes wideout Jaxon Smith-Njigba is one of three OSU players with short odds for the award. Quarterback CJ Stroud has the shortest odds to win the award, but in a year that his teammates Garrett Wilson and Chris Olave get drafted back-to-back in the first round of the 2022 NFL Draft, it was Smith-Njigba who actually put up the best numbers of the three with 95 receptions for 1,606 yards and nine touchdowns.

In the Rose Bowl, he caught 15 passes for 347 yards and three touchdowns and had 97-plus receiving yards in the seven games before that, including 45 catches for 611 yards over the final four games of the regular season (against Nebraska Cornhuskers, No. 19 Purdue Boilermakers, No. 7 Michigan State Spartans, and No. 5 Michigan Wolverines).

At BetQL, customers can sign up for their annual subscription and get wagering insights on all sports from top analysts. Best bets picks are included! 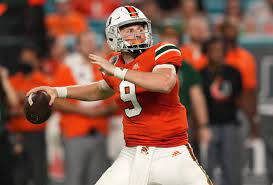 Before last season, many didn’t know who Tyler Van Dyke was. The Miami Hurricanes quarterback didn’t play a second of his freshman season, instead sitting behind then-starter D’Eriq King.

After an early-season injury to King during the 2021 season, Van Dyke was thrust into his first real snaps of college football. He was extremely impressive in his first game as the starter, going 10-11 for 270 yards and three touchdowns. Not many players have that type of game taking their first snaps, but that was just the start of what would become a great season for the young QB last year, and what has some thinking he could be a serious contender for the Heisman Trophy award in 2022.

Van Dyke led the Hurricane’s offense for the remainder of the season, and the team looked much better overall in his time as the starting QB. In the end, Van Dyke had a 66.2 completion percentage while averaging 365.7 passing yards per game. He threw for 20 touchdowns to just three total interceptions. This wasn’t even a full season of work and he already had eye-popping numbers.

His performance helped Miami qualify for a Bowl Game, but unfortunately, they had to withdraw from the Sun Bowl due to NCAA rules on a COVID outbreak. We didn’t get to see Van Dyke perform in a bowl game, but that doesn’t change the fact that he was phenomenal for his team in the time he was starting last year, and that’s poised to continue over to the 2022 season.

The Hurricanes have been waiting a long time to get back their once-proud program that thoroughly dominated college football in the late 1990s and early 2000s. It appears that the team is at last on the rise, and while Van Dyke may not be a generational quarterback to get them there (who knows, he could be), he’ll definitely make them competitive again.

Miami has a new head coach with Mario Cristobal taking over this coming season, and he already has heaped high praise on his young signal-caller, calling him the best QB in the country. It isn’t going to take very long into the season to find that out, as Miami has a date with the vaunted Texas A&M Aggies in Week 3. If Van Dyke shows up in that game and leads his team to a victory, you can pretty much guarantee that his Heisman Trophy odds are going to fly upwards.

You can get Van Dyke to win the Heisman at +2600 at some sportsbooks, so now’s the time to jump on those odds and invest a little bit on his future.

Second Half of MLB S