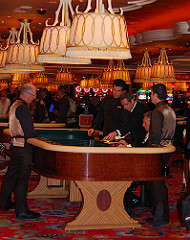 Dealers at Wynn Resorts have gotten a huge boost from the U.S. Supreme Court in their 12-year fight against a company policy requiring them to share their tips with the supervisors at their games.

The court on June 25 dismissed a petition by Wynn Las Vegas to overturn a federal appeals court decision ordering the company end the practice, under which dealers must contribute 15 percent of the tips left by gamblers to a pool shared by pit bosses and other game managers.

The company is the only Las Vegas casino operator to employ the policy, which was instituted in 2006 by then-Chairman and CEO Steve Wynn, who reportedly was miffed after a weekend of huge losses at blackjack to a group of high rollers.

The money involved is significant. Dealers on the Las Vegas Strip can earn more than the staff managing the games, their total compensation at some casinos approaching six figures or more.

“This is a major milestone for the dealers,” Kanie Kastroll, a dealer who represents Wynn union workers, told the Las Vegas Review-Journal. Kastroll estimates the policy has cost her as much as $150,000 in tips over the years.

The dealers have been battling for years to void the policy, filing their latest lawsuit in 2013 in District Court in Nevada. They lost the case but successfully appealed to the 9th U.S. Circuit Court of Appeals. Wynn Las Vegas then appealed to the Supreme Court.

The case now goes back to state District Judge Robert Jones, where Joshua Buck, an attorney representing the dealers, said, “I feel strongly we will prevail and recover the tips and the wages on behalf of the dealers.”

About 800 current and former Wynn dealers are a party to the suit, according to attorneys, and a victory could get them more than $50 million in lost compensation dating back to May 2011.

Wynn Las Vegas believes that won’t happen. “We will vigorously defend our position and anticipate a finding in our favor,” said spokesman Michael Weaver.