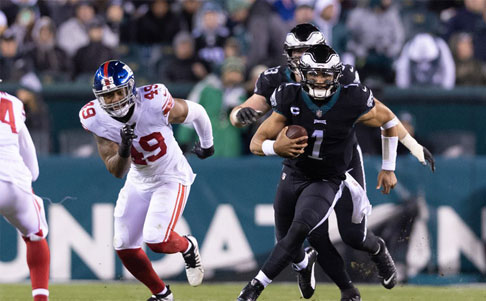 The NFC Divisional Round features a throwback game with the San Francisco 49ers and Dallas Cowboys and the Philadelphia Eagles against the New York Giants.

The NFL NFC divisional matches are set with three teams from the NFC East and one team from the NFC West. I will breakdown both games with a selection on the winner and the total.

The Philadelphia Eagles are hosting the New York Giants. The Eagles are favored by 7.5 and the total is 48. The money line is Eagles -350 and the Giants +260.

The Eagles earned the NFC Bye and are the home team. The Giants are coming in off a road upset victory over the Minnesota Vikings by a score of 31-24. New York quarterback Daniel Jones led the way, Jones became the first QB in NFL Postseason history with more than 300 passing yards, two or more touchdowns passes and more than 70 yards rushing in a playoff game.

The Eagles and Giants have met four times in the postseason and have split the games 2-2. The Eagles have won the last two match ups.

The Eagles played the Giants on December 11 when the game had divisional implications. The Eagles won the game 48-22. The Giants did not play their starters in the second game against the Eagles, but the game was competitive.

Daboll is a candidate for Coach of the Year. The Eagles have shown a balanced attack and have been dominant most of the season. The question mark about them is the injury to the shoulder of quarterback Jalen Hurts. If Hurts can play at 80% of what he is capable of during his bid for NFL MVP season, then the game is a blowout again.

Jones has been inconsistent throughout his career as a starter in New York. While Jones was impressive last week, The Vikings defense was poor all season. The Eagles will provide more pressure and shutdown running back Saquon Barkley. Take the Eagles minus the points and the game goes over. 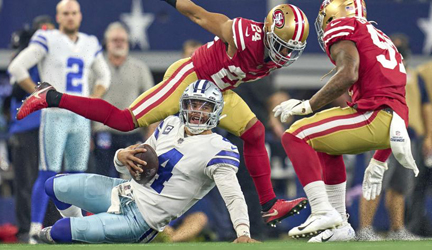 San Francisco won their Wildcard game by a score of 41-23 over the Seattle Seahawks. The Cowboys won on the road against Tampa Bay Buccaneers by a score of 31-14.

The Cowboys and Niners have met seven times in the postseason with the Cowboys holding a 5-2 advantage.

Niners Head Coach Kyle Shanahan has the edge over Dallas Head Coach Mike McCarthy. While McCarthy does have a Super Bowl win to his credit, he has made several questionable moves during his tenure as the coach of the Cowboys.

The Niners have 68% of the early action on them. For the total, 66% of the wagers are on the Over.

The Niners are the hottest team in the league right now. They are 12-6 against the spread. The defense has performed well throughout the season.

Dallas showed lapses during the season against teams that were inferior to them. While that won’t be the case here, Dallas does tend to turn the ball over. The Niners are one of the league’s best in scoring defense.

The addition of Christian McCaffrey gives Coach Shanahan multiple ways to attack on offense. The Niners will run the ball and dominate time of possession. Dallas beat a weak Tampa Bay team that couldn’t run the ball. Take the Niners and the over.

Take Under on Charlo