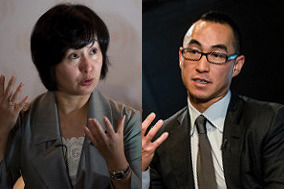 Macau gaming founder 95-year-old Stanley Ho still casts a long shadow over the casino industry there even though he hasn’t been seen in public since 2006. Pansy Ho and her brother Lawrence Ho—both billionaire business magnates—are leading figures on the international gaming scene and the heirs apparent to Stanley Ho. They are well positioned to increase their influence in Asian gaming jurisdictions.

Pansy and her associates recently became the controlling shareholders of SJM Holdings, one of Macau’s Big 6 concessionaires. And Lawrence, chairman and CEO of Big 6 operator Melco Resorts & Entertainment, has set his cap to win one of the first three integrated resort licenses in Japan.

According to CalvinAyre.com, through her company Shun Tak Holdings, Pansy Ho formed an alliance with the Henry Fok Foundation to govern SJM and its controlling shareholder, the privately-owned Sociedade de Turismo e Diversoes de Macau, founded by patriarch Stanley Ho. Together the parties have agreed to jointly vote their combined 53 percent of SDTM’s issued shares to more efficiently manage SJM.

The Henry Fok Foundation is named for one of Stanley Ho’s original business partners, Henry Fok, who co-founded STDM in 1962.

The South China Morning Post, in a news story that called Pansy Ho “Macau’s casino queen,” reported that shares of SJM rose nearly 10 percent to HK$7.96 on the news, signaling market approval of the new alliance. Shun Tak shares rose as much as 7.7 percent.

According to a filing to the Hong Kong Stock Exchange, “the parties have agreed to use their best efforts to exercise their respective powers and rights as shareholders, directors and corporate directors.”

The takeover may not be accepted well by current management, which includes Stanley Ho’s fourth wife Angela Leong. Relations between Leong and Pansy were reportedly “frosty,” according to Inside Asian Gaming.

Brokerage firm Bernstein warned of an “ugly battle” to come, which may also include Daisy Ho, Pansy’s sister and chairman of the board, as well as Ambrose So, who ran the company when Stanley Ho was active.

“The hope that the Pansy Ho-Fok alliance can change the direction of SJM is just that at this stage—‘hope.’ There remain strong imbedded influences in the SJM organization that leave us skeptical that real solid changes can manifest in the near to medium term,” wrote Bernstein in a note to investors.

“Some management changes may occur this year (Louis Ng, the current and long-serving COO may retire), but two key parties – Executive Director Angela Leong and CEO Ambrose So – may not be as simple to replace,” Bernstein wrote.

“Leong and So (along with others in management) still hold material direct interests in SJM and hold considerable sway over SJM operations. The move to replace either one, without their willingness to go, may be an ugly battle.”

SJM Holdings and its subconcession sold to MGM China (and major shareholder Pansy Ho at 25 percent) will be the first in line to see their Macau casino concessions expire, in March 2020; they may apply for extensions of those concessions provided the requests are submitted at least six months before the terms expire, attorney Bruno Beato Ascenção of Macau law office BBA told GGRAsia.

Meanwhile, Lawrence Ho, chairman and CEO of Melco Resorts & Entertainment—also a Big 6 concessionaire in Macau—recently told the Macau News Agency that Japan is the brass ring, and that he will do all he can to be among the first three integrated-resort operators there. Japan legalized casino gaming in December 2016; the market has been valued at up to $25 billion per year, with some estimates as high as $40 billion.

“We would be more interested in settling in metropolitan areas,” said Ho. “For now, Osaka is the only major city that has raised their hand and very aggressively pushing ahead. We’ve all heard rumors about of Yokohama in the Kanto region. That would be very appealing for us but up until now Yokohama and its mayor have not really expressed that interest.”

Ho said Melco’s strength as an operator is its focus on entertainment and a “strong track record on premium guests.” “Not to say we won’t attract visitors from other parts of the world, but we do have a huge China database,” Ho noted. “What will really drive Japan’s growth will be its closest neighbor.”

Ho added that “what differentiates Melco from our competitors is that we want to continue to experiment. We’re very lucky to have gaming revenues to subsidize some of these entertainment investments.”;

Ho pointed to the recent opening of the new entertainment extravaganza Elekron at the Melco’s Studio City integrated resort in Macau. The show features unique vehicles designed by Tesla, and awe-inspiring pyrotechnics and choreography.

“Elekron is the latest in a long line of firsts for Melco and Macau,” said Lawrence Ho. “Together, we are creating a world class destination for tourism and the MICE industry. And like everything we do at Melco, it’s a product of successful, creative, hardworking partnerships with some of the world’s finest talents.”