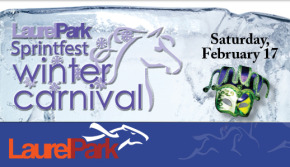 Laurel Park, located between Baltimore and Washington, D.C., operates in the shadow of Pimlico, the nearby track that offers the Preakness Stakes in horse racing’s Triple Crown in May. But on February 17, the track unfurls its Winter Carnival Stakes, taking a stab at being an industry stalwart for one day.

Hot trainer Linda Rice, who won last year’s Fritchie with High Ridge Road en route to tying Kieron Magee for Laurel’s winter-spring meet training title, nominated several contenders for the Fritchie. Bettors notice a strong relationship between a trainer and a track and will thus throw some money in that direction.

Gulfstream Park in Florida paid out more than $15 million for its carryover Rainbow Pick 6 a couple weeks back. The track randomly decides to do this when the pot reaches a number it feels will attract strong betting interest. Bettors wagered a fever-pitched amount of nearly $16 million on January 28, the day of the Pegasus, to complement $4 million carried over. And then it was paid out.

The total grows quickly, because if no one hits all six races correctly, a difficult task, most of the money will carry over to the following day. The same procedure continues until, finally, the track announces that the pot will pay out on a given day. As the deadline nears, the Rainbow Pick 6 becomes a wagering haven, exactly what the track wants. For bettors, this is like playing a lottery with reasonable odds.

Each selection only costs 20 cents, multiplied by the number of entries one decides for each race. That prompts a surge of entries and multiple winners who are paid in the thousands.

The pot reached more than $600,000 to start this week. Watch how quickly it escalates, especially on a weekend, if nobody hits it.

The Brooklyn Nets are buried in the basement of the NBA’s Atlantic Division. They were recently 19-38. Or, are they? The Nets are a league-best 28-16-2 as an underdog against the spread entering the second week of February. It shows they play hard in losing efforts. How about Dallas? The team is 18-38, but 22-18 against the spread as a dog.

Conversely, much is expected from top teams, who may win the game without beating the number. The Cleveland Cavaliers sit atop their division. But, the team with LeBron James at home against the spread? 6-20.

One of the good teams that has been a solid play via the odds has been the Boston Celtics. They are 18-9 against the spread on the road and a stellar 11-2 as a dog against the spread. Perhaps somewhere in this mix you’ll find your edge when betting the NBA.