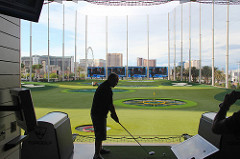 The Horseshoe Casino in Baltimore has lured the high-tech driving range company Topgolf into joining it in developing vacant waterfront property into a family-friendly entertainment complex with an expected opening of 2020.

Caesars Entertainment, owner of the Horseshoe and city officials made the announcement last week in the company of the Baltimore City Council President Bernard C. “Jack” Young and other VIPs.

The entertainment complex will take up six acres that lies between the Horseshoe Casino Baltimore, which controls the property, and the M&T Bank Stadium.

The project is part of what the city calls transforming the “southern gateway” to the city.

Eric Chamberlin, regional president of Caesars Entertainment Corp. and general manager of the casino, told the crowd,  “We had a vision to be more than a casino. We wanted to be a catalyst for job creation and economic development. …This is the city’s next entertainment district.”

Topgolf is the first new tenant for the corridor. Caesars is working with the city to entice other entertainment companies into a corridor that still has a gritty, industrial vibe crisscrossed by railroad tracks and bordered by highway overpasses. But it also sits adjacent to a football stadium and Oriole Park.

The area has also attracted the new version of the old Baltimore concert hall and club Hammerjacks, which will open next year. Offices and apartments are also in the works.

Topgolf has 41 locations in the U.S. with others on the way. Many of its customers are in the 18 to 34 demographic, which also happens to be an age group that the gaming industry is working hard to attract. The company will also hire 500 fulltime employees and promises to inject $264 million into the local economy over the next ten years.