How Bryson DeChambeau Is Changing Golf 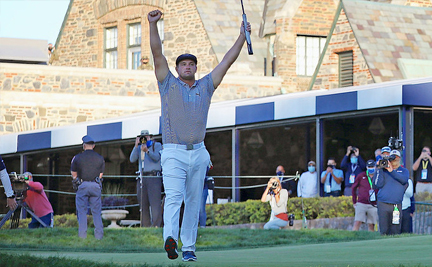 It was only his first major championship, but when Bryson DeChambeau strolled down the 72nd hole at last week’s U.S. Open Championship, astute onlookers knew that he had changed the game of golf forever.

They call him “the Casino,” because he’ll do anything to get an edge, even a small one, just like the best casinos do with their players.

Maybe it’s his clubs, which are all the same length. Or perhaps it’s his rigid, straight-up-and-down stance when putting. Or it could be his mammoth, 350-yard blasts, which outdistance all his rivals. But after winning his first major, the 2020 U.S. Open Championship at Winged Foot Country Club in New York, it was clear that Bryson DeChambeau does it his own way.

It actually started when DeChambeau returned from the Covid lockdown, with a bulked-up body and a renewed desire to succeed by flaunting many of the assumptions about how to play the game. By putting on 40 pounds of muscle over an already ripped torso, DeChambeau looked like the Incredible Hulk during the first few tournaments in June. The results were obvious as he gained dozens of yards in distance off the tee.

But bulking up to add yardage isn’t anything new. Tiger Woods did it in his prime, causing a lot of courses to “Tiger-proof” their layouts by adding yardage to the already long holes.

What’s different with DeChambeau is his go-for-broke attitude. At the U.S. Open last week, he only hit 12 fairways in his final two rounds on a course that supposedly punishes you for missing the short grass by depositing you at the bottom of six inches of dense rough. The difference is that DeChambeau hit the drive so far, he was left with a short iron shot to the green, which he hit a majority of the time. Other long-hitting pros have noted this strategy and adopted it.

Bet up to $100 on your first single bet at GoldenNuggetCasino.com. If your bet loses, Golden Nugget will refund your stake up to a $100 Free Bet. Only straight wagers and live bets qualify.

The physical manifestation of DeChambeau’s quest was just the latest twist in his pursuit for excellence in golf. It’s a complicated game, but DeChambeau believes that gathering more and more data somehow makes it simpler—and more repeatable.

At the age of 16, he reportedly told his father, “I’m going to change the game of golf,” then proceeded to build a reputation as golf’s mad scientist. He built a set of clubs of the same length and weight, so his swing could be repeated over and over again, no matter what club he was using. He dunked golf balls in water while hitting on the range, to see how a wet ball would change its path. He later recorded humidity to estimate how it would affect the length.

By bulking up, DeChambeau wants to do more than just hit the ball far, he wants to build the perfect golf machine, one with a replicable and powerful swing. There are no foreign substances suspected, and his choice of food—awesome amounts of bacon and eggs, steak and potatoes, peanut butter-and-jelly sandwiches and endless protein-filled shakes—makes it clear that he needs elevated workouts to transform that fuel into muscle.

He’s been working with swing coach Chris Como, who previously helped Woods refine his swing. Como widened DeChambeau’s stance to provide a sturdier base, allowing his arms to accelerate through the swing. He uses state-of-the-art video systems to track every movement during the swing, followed by film sessions where he breaks down his swing like a linebacker breaks down a quarterback’s motion.

Sign up at BetMGM.com and your first sports wager is risk-free. Place a bet of $25 or more and BetMGM will match it up to $100 in real cash, and throw in $25 FREEPLAY for the BetMGM casino app!

DeChambeau also pushes the envelope on equipment. Through a lot of trial and error and scientific observations, he’s settled on a Cobra Speedzone driver with a very specific angle on its face. It’s attached to a custom-made shaft, a fact that became important when he snapped a shaft during the PGA Championship in August by leaning on it. His team quickly came up with a replacement shaft, which was ready for DeChambeau at the next hole.

But the golf associations have limits to how the clubs can be developed. The materials used and the technology utilized can only be customized so much. But there is no end to the ways the human body can approach the game of golf. That means the sky’s the limit for DeChambeau, and every other golfer who will now try to emulate his success.

The real secret to success for DeChambeau? He puts in the work. His science-based approach to the game would fall flat if he didn’t put in the reps necessary to prove his hypothesis. Eating 6,000 calories each day would fatten you up unless you burn them off. After his Saturday round at the U.S. Open last week, he returned to the driving range and swung until way past dark, to isolate a hitch in his swing that caused some inaccuracy during the day. So in addition to his analytical mind, his work ethic is also second to none.

And as we approach the final major of the year, the Masters Tournament in November (yes, that still sounds very strange), DeChambeau is already among the favorites. He trails only Rory McElroy, who’s chasing his own personal grand slam and lacking only a Masters victory. Rory is +900 while DeChambeau is +1000. His length and his skill at the short game give him a major advantage at this legendary track. With the U.S. Open under his belt, DeChambeau truly believes the sky’s the limit, and he’s going to figure out how to get an advantage over the field.

After all, he is “the Casino.”

Is Authentic the Hor