How early 2019 horse racing trends can impact your betting dollar 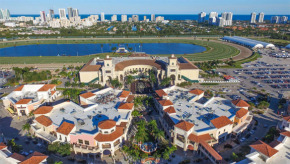 A mid-February look at hot tracks and trends impacting your betting dollar.

Gulfstream Park in Florida remains a bettor’s paradise. The track is up to its classic long shot tricks. Look for pricey horses, especially in big fields on the turf.

Its February 9 card produced a glimpse of its wide-open nature. After four favorites prevailed, it began raining long shots. Boom, a 40-1 winner and an exacta of $2,584 and a $1 superfecta worth more than $79,000 in race five. A 9-1 shot prevailed in race six and boom, a 50-1 bomb in race seven knocked out 90 percent of the Rainbow Pick 6 pool and prompted a superfecta payout of nearly $14,000. A 12-1 shot won race eight. Four chalks and four long shots produced a dramatic eight-race package.

The long shots, combined with the mandatory Rainbow Pick 6 payout designated by the track, delivered a Pick 6 payout of more than $100,000.

And, the process began anew last Sunday. A carryover of more than $36,000 emerged from just one day. Yes, these races are difficult to hit, but carryovers don’t take long to reach $1 million, especially given the handle on a weekend. Gulfstream saves many of its loaded cards for Saturdays and Sundays.

Maiden special weights and regular maiden races are good spots to take a shot at the big prices. A horse in maiden company has never won a race. Why should anyone be prohibitive in that sense? Also consider low-level claiming races to find live underdogs as those horses take turns beating each other.

Are you in a slump? Seasoned players recommend narrowing your focus, getting a feel for what’s happening at a particular track and handicapping the night before you go. Some facilities have a track bias, favoring the rail, the middle of the track or the outside. Some naturally favor speed horses; others are heavy and will give the nod to closing horses.

That’s the first step toward reversing a cold period. Another tactic is to reduce bets dramatically and not return to the top levels until your handicapping matches what’s happening at the track. Some facilities, like Gulfstream Park and Turfway Park, offer easily accessible race replay shows. That’s a great handicapping resource.

Recent trends: Delta Downs has unfurled a fair share of favorites running second or third and teaming with longer-priced horses to complete handsome trifecta payouts. This is made possible by a cheaper level of racing and large fields.

Only hardcore gamblers will play 300-yard races, right? Well, I’ve had some success in those events by playing the outside two horses. They don’t have the traffic problems of the horses on the inside and hey, if the race is only 15-16 seconds, a bad break is curtains.

Football isn’t actually over yet

Football is over. No it isn’t. Some gamblers have found the Alliance of American Football, which debuted February 9 with an eight-team league running each weekend through April. It was founded by NFL executives, and fashions interesting attention-span tweaks like no TV timeouts and betting factors like no extra points.

The league has no major markets, but does have a CBS contract and offers wagering, even in-game play, at places like the Westgate Sports Book in Las Vegas. We expect outlets like SugarHouse to get that in place over time.