How to Jump Start Your 2018 Horse Racing Bets 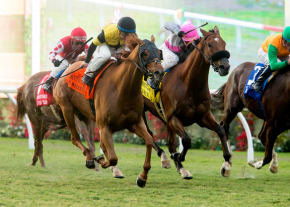 Will our New Year’s resolutions last longer than a six-furlong race, or about one minute and 15 seconds?

The flip of the calendar is always a nice time to reset, reprogram and start fresh.  Since it’s opening week for the 2018 race handicapper, here are some proven winners.

Homework. Get that racing form to gain a perspective on upcoming races. It will indicate class drops, layoffs, breeding, a horse’s preferred running surface and style. This will give you an important sense of the pace of each event, whether a race is loaded with front-running speed, ralliers or stalkers.

Hone in on the money. An eight-horse field with two 5-2 shots and a 6-5 favorite may not yield much on the exacta or trifecta line. You might have to narrow the bet to one horse, either as a win bet or as a key over some others multiple times.

Know when to spread. A field of 10 or more with no prohibitive favorite is ripe for a large exacta, trifecta or superfecta payout. It will also be difficult to hit. Some worthwhile “spread” bets include a 50-cent trifecta box of four horses, costing $12, or a $1 exacta wheel, taking a horse first and second with the entire field. That may cost about $20. It has worked extremely well during the winter meets at Gulfstream Park, which is long shot heaven. Horses “ship in” from all over the country to Gulfstream. It is difficult to compare their previous levels of competition and some excellent horses will be overlooked.

Pick 4s, Pick 5s and Pick 6s return more than you’d think because many races prompt you to protect your pick by selecting multiple entries in the same race. That money dramatically swells betting pools and returns much more than if you’d played each race individually.

Sentiment. A horse sporting the leading jockey and trainer will often be over bet. If you like the horse, you might feel better about your prospects. If you don’t like it, feel even stronger about playing against it.

Off With A Bang: Santa Anita
Santa Anita gets the year rocking with the $200,000 San Gabriel Handicap and $100,000 Sham Stakes on Saturday, January 6. Gulfstream adds the $100,000 Mucho Macho Man, Ginger Brew and Kitten’s Joy events. Aqueduct features the La Verdad, and Fair Grounds offers the Louisiana Futurity, both approximately $100,000.

On January 13, Fair Grounds, Gulfstream, Santa Antita, Oaklawn and Aqueduct combine to offer 10 races of $100,000. The bigger purses bring out the bigger bettors.

NFL Wildcard Weekend
History suggests you “over” indulge in the NFL Wildcard Weekend. The over total has a lopsided winning history between the Rams and Falcons, Saints and Panthers, Bills and Jaguars, and Chiefs and Titans. New Orleans has covered the last six times against Carolina. Keep this in mind amid shifting lines this week: The past does not guarantee the future, but wildcard games have been higher scoring, and the weather should not be a factor in at least three of these games.

At least one tease and parlay ticket makes sense here. The tease allows you to change the spread, usually by six points, to whomever you favor. The catch is that you must do this in multiple games and take them all. If you want the “overs,” you can “tease” the number down by six points on all the games. In a four-team setup, you are likely to hit three and then sweat out the fourth.