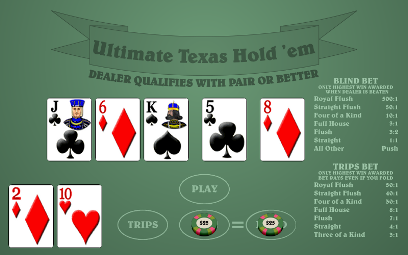 Ultimate Texas Hold ‘em is one of the hottest table games in the United States. It was released during the poker boom and gave players a way to enjoy Texas Hold ‘em with lower limits than the traditional game.

The game starts by a two wagers being placed on the felt. The ante and blind bets are mandatory. There is an optional Trips bet offered.

Players start Ultimate Texas Hold ‘em by receiving two cards. The dealer also receives two cards. All are dealt face down. Five cards are placed face down in the center of the table.

The player looks at his cards and determines whether he would like to play before the flop or check. If he chooses to play, there is an option to raise either three or four times the ante bet. There is never a reason to wager three times. If the hand has an advantage over the dealer then the maximum should be bet. There are no more decisions for a player to make once a raise is made. A pre-flop check means that no chips are placed on the table. An option to raise will come later in the hand.

The flop is then dealt. A player that did not raise pre-flop will have the option of raising two times the ante or check.

The turn and river are turned face up. This is the last chance a player has to raise before being forced to fold. A raise is equal to the ante bet on the river. A player that folds gives up his ante and blind bet.

The dealer shows his hole cards after all players have acted on the river. The dealer must have at least a pair to qualify. This can include a pair on the board.

A qualifying dealer hand will go through the same procedure as a non-qualifier. The only difference is that the ante is in play and may be won or lost, depending on whether the dealer or player wins.

A player must win the hand to receive a blind bonus.

Trips is an optional wager. It wins regardless of whether the hand beats the dealer. A player can even fold and still win the Trips wager. An example of this would be if three of a kind was on the board but the player held a 2 and a 3 that did not match. He should fold the hand and play the board, winning the Trips bet.