HomeThe ShuffleHow to Shop for Odds in the NFL Post-Season

How to Shop for Odds in the NFL Post-Season 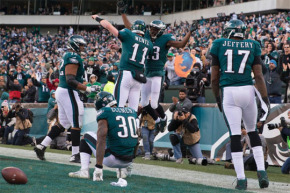 Post-season football presents a chance to bet with confidence. No team is looking ahead to a future game and every team goes all out, solidifying Tom Brady’s sentiment that “it doesn’t matter where you play or who you play in the post-season. It matters HOW you play.”

In recent years, dogs have done well in the opening round, and favorites have prevailed in the divisional round. That gives you interesting variables to ponder.

Our friends at PlaySugarHouse.com had Dallas (vs. Seattle), Houston (vs. Indianapolis) and Baltimore (hosting the Los Angeles Chargers) laying 2.5 points and Chicago (vs. Philadelphia) giving six. Three games by less than a field goal? Shows the respect visiting teams have in this round. The “dogs” are on a short leash.

Check out PlaySugarHouse.com to review and place wagers.

If you want an angle, some organizations tout algorithms, resulting in 10,000 projected snaps of the ball, to predict a winner. If you like that approach, Indianapolis and Houston over 48 is the suggested play. The teams played twice this year, scoring 71 points in the early season and 45 the second time out.

The algorithm also suggests the Bears will cover six points against the Eagles.

Looking to next week, New England, the Los Angeles Rams, New Orleans and Kansas City all host a second-round game.

Tidbits: Chicago has the best defense. New England was 3-5 on the road and 8-0 at home during the regular season. Chiefs coach Andy Reid has a stigma about losing close playoff games, but he has a bye this time. And, Patrick Mahomes. It may be time for a change.

One edge for the bettor has been the over-under total, with leaky defenses, new rules against hitting the quarterback and mobile signal callers combining for huge offensive numbers. Defensive coordinators will counter with some new looks, often blitz packages, not seen during the regular season.

Shopping for odds has never been more valuable. Competition among betting houses can provide that half-point you want, say changing a three-point favorite to two and one half. If you like the favorites in the opening round, place those wagers early, just in case the 2.5 number creeps up to three.

The track’s entire month leads to the phenomenal Pegasus Invitational January 26, with a $16 million purse for just two races. Gulfstream’s big fields and numerous Pick Six propositions set up massive carryovers. The track also announces periodic Pick Six payouts to put the betting pool on steroids. Pegasus Day will be a barn-burner. If you can’t be in South Florida to beat the winter, you can still bask in some betting heat.