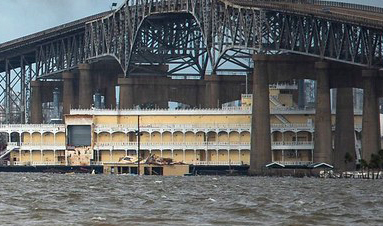 The most powerful hurricane ever to hit Louisiana came ashore last week with Lake Charles in its sights. While the 150-mph winds inflicted some pain—the Isle of Capri casino (l.) broke its moorings and became wedged under the I-10 bridge—in general, the casinos escaped with little damage.

The fiercest hurricane in modern times slammed into Louisiana last week passing dead over Lake Charles, home to half a dozen casinos. With 150-mph winds and a 20-foot storm surge, the hurricane could have been catastrophic but in the end, few lives were lost and damage was moderate in relation to what it could have been. The fast-moving storm then passed over another casino location, Bossier City and Shreveport, prompting the first ever hurricane warning for the far inland cities.

“It is clear that we did not sustain and suffer the absolute, catastrophic damage that we thought was likely,” Louisiana Gov. John Bel Edwards said. “But we have sustained a tremendous amount of damage.”

The three Lake Charles area casinos—Penn National’s L’Auberge, Caesars Entertainment’s Isle of Capri and the Golden Nugget—sustained moderate damage with roofs ripped off and windows smashed but nothing that can be fixes. “It’s all repairable,” said Golden Nugget owner Tilman Fertitta.

The most serious damage appeared to be at the Isle of Capri, where gaming is still conducted on a physical riverboat, unlike the other two where gaming occurs on land-locked barges. The riverboat broke free of its moorings and was blown across the lake only lodge itself under the bridge that carries Interstate 10. At press time, it had not been removed and officials were evaluating the best path forward to free it with a minimum of damage to the boat and the bridge. The bridge was closed until it can be inspected and repaired.