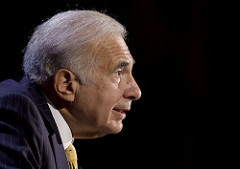 Billionaire investor, corporate raider and gaming operator Carl Icahn became the largest shareholder last week and continued his drive to effect a sale of Caesars Entertainment, buying enough stock to give him a 15.53 percent stake in the company. His purchase follows an agreement a week earlier under which Icahn’s hand-picked slate of three directors was added to the Caesars board. The agreement gives Icahn a fourth board pick if a new CEO who is acceptable to new directors is not named within 45 days.

Keith Cozza, Courtney Mather and James Nelson were added to Caesars’ board of directors effective immediately. In return, three existing directors will step down.

Last week’s stock purchase triggers a need to become licensed. He previously held a 9.8 percent interest in the company.

Anyone with 10 percent of any class of voting securities of a (publicly traded company) shall apply to the (Nevada Gaming) Commission for a finding of suitability,” Nevada Gaming Control Board Chairwoman Sandra Douglass Morgan told CDC Reports.

Licensing should not be a problem for Icahn since he once was the majority shareholder in Tropicana Entertainment and American Gaming & Entertainment, both of which he subsequently sold.

Icahn has proposed Anthony Rodio, CEO of Affinity Gaming and former head of Tropicana Entertainment—which Icahn bought out of bankruptcy, revived and sold last year to Eldorado Resorts—as the new CEO of Caesars, to take over when current CEO Mark Frissora steps down later this year.

In fact, Eldorado has been cited by several analysts as a possible buyer of Caesars.

“We do not pretend to know if Eldorado and Caesars are in any deep merger discussions, though the universe of buyers is limited and Eldorado is best suited to extract full value from Caesars assets, in our view,” Bain wrote in a note to investors. Bain said at $12 per share, a buyout of Caesars would be valued at $9 billion.

“Outside of being one of a few potential candidates for Caesars, in our view, Eldorado has proven its ability to generate (cash flow) synergies to best maximize value,” Bain said. “Eldorado has little overlap with Caesars (another good fit), except in Atlantic City.”

Icahn has pushed for a sale of Caesars entertainment, or a merger with another operator. “Mr. Icahn is of the smartest investors in the industry and well-suited for structuring such a deal if it’s possible,” SunTrust gaming analyst Barry Jonas told investors in a research note . “However, we will look for more details on any potential deal to see if the motive is more about creating short-term or long-term shareholder value.”

Icahn said in a news release that the “best path forward” for the company includes “a thorough strategic process to sell or merge the company.”

“Caesars would be a great opportunity for certain investors who have already expressed interest, and I’m glad the board will explore these opportunities,” Icahn said in the release. “Independent of strategic alternatives, I believe Caesars should also be focused on leadership succession, disciplined capital allocation, improving operating performance and optimizing real estate and other assets.”

The latest developments pushed Caesars stock up by more than 4 percent the day after the agreement, but subsequently dipped from $12.80 to $9 per share.