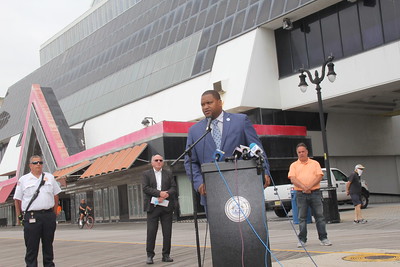 Atlantic City Mayor Marty Small (l.) told reporters last week that Carl Icahn, owner of the former Trump Plaza Hotel & Casino, has submitted plans and a timeline for demolition of the aging structure. The property has been vacant for almost six years.

Small confirmed that the property’s owner, Carl Icahn, has submitted plans and a timeline for demolition of the building, located next to Jim Whelan Boardwalk Hall.

Small said it was a priority of his administration to have the casino removed for public safety reasons. Though he had negotiated amicably with Icahn on the removal of the building, in March the city threatened to take the billionaire hedge fund manager to court after pieces of debris fell from the 34th floor onto the Boardwalk. The incident was captured on video and uploaded to social media. An emergency inspection by code enforcement and construction officials confirmed that the aging structure had to go.

Given 45 days to respond, Icahn has finally submitted a comprehensive demolition plan. The estimated cost is between $11 million to $14 million, though Small said it could be higher. The city plans to immediately construct a net around the building for public safety reasons.

Trump Plaza closed permanently on September 16, 2014, putting 1,300 employees out of work. Icahn acquired the building in 2016, when he purchased the debt of bankrupt Trump Entertainment Resorts. Donald Trump later removed his name from the building.

Several attempts to sell the property over the years fell through, and it became an eyesore at the center of the Boardwalk. Panels and metal sheeting fell from the facade, and the vacant casino also sustained damage from high winds, posing a threat to pedestrians.

Small was quick to praise Icahn for his cooperation in the matter, saying that despite “some things that were said,” the city and the developer had negotiated in good faith and it was a pleasure working with him.

Both towers of the building will be imploded after sections are safely removed from the surrounding properties and the Boardwalk. Though Icahn’s plan sets final demolition by June 2021, at the height of the summer season, the Small administration wants the job done by February of next year. To this end, the departments involved—fire and police, risk management and others—will hold a joint meeting to speed the permitting process.

There are no plans to remove the adjoining Rain Forest Café, which is separately owned and operated.

Small said he hoped the removal of Trump Plaza would make the area more attractive to developers. “The city of Atlantic City is open for business, and my administration means business,” he said.