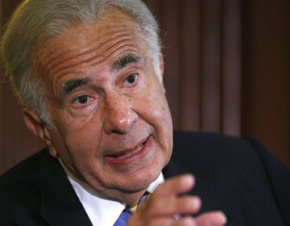 Billionaire corporate raider Carl Icahn has joined an expanding group of activist investors who believe their Caesars Entertainment stock is undervalued and that the company needs new ownership to redress that.

Caesars has been under pressure from investors to do something dramatic since it exited a lengthy Chapter 11 reorganization in October 2017—the result of a previous sale, ironically enough—a leveraged buyout that saddled the company with tens of billions of dollars of debt.

Despite Caesars’ size and diversity—more than 40 casinos in 13 states, the World Series of Poker, a megaresort under development in South Korea—the stock has never recovered. Last summer and fall, it dropped below $6. It was around that time that the company rejected an offer from billionaire restaurateur and reality TV star Tilman Fertitta to merge with his Golden Nugget casino chain in a reverse buyout valued at $13 a share that would have put him in control of the combined companies. It was also at that time that CEO Mark Frissora tendered his resignation. Reports are that Fertitta, who owns around 1 percent of the stock, is still interested in a combination.

The stock has since traded above $9, and Icahn has snapped up a 9.78 percent stake at those prices. According to news reports, he has financial exposure to another 10.7 percent through a financial swap.

The 83-year-old financier has owned several casinos and casino companies in the past. By all accounts, though, he is not interested in adding Caesars to the list. Rather, the company needs “new thought, new leadership and new strategies,” as he put it in a regulatory filing announcing his stake.

“The board should conduct a strategic process to comprehensively assess the best path forward for Caesars, and we believe that shareholder value might be best served, and enhanced, by selling the company,” he said.

In the meantime, he wants the company to drop its search for a replacement for Frissora, who has agreed to say on through April. He also wants a seat on the board of directors.

Caesars responded that it “remains open to all reasonable alternatives to enhance value for Caesars’ stockholders and has and will continue to evaluate strategic alternatives presented.”

It added, “The board and management have engaged in discussions with Mr. Icahn and expect to continue a constructive dialogue. The company intends to carefully evaluate Mr. Icahn’s suggestions, including his request for board representation.”

News of Icahn’s investment bumped the stock 6 percent, suggesting that Wall Street likes the idea of a sale. Effecting one, though, given Caesars’ size, could prove a regulatory and antitrust nightmare.

As for Las Vegas-based Boyd, it now operates 29 casinos in 10 states, 12 of which are in Nevada. Reno-based Eldorado Resorts, another major acquirer, has 27 casinos in 13 states.

The Caesars portfolio includes nine casinos in or around the Las Vegas Strip, which means MGM Resorts International, which operates 10 Strip resorts and owns 50 percent of the CityCenter resort complex, is likely out of the picture.