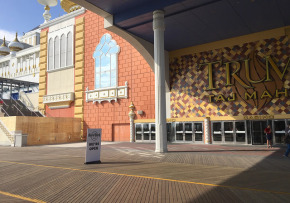 Carl Icahn has said he will not sell his closed Trump Taj Mahal casino in Atlantic City, but will surrender its casino license.

Icahn told the Associated Press that while he does not want to sell the former casino in the current market, he’s placing a deed restriction on the property to keep it from re-opening as a casino unless a future buyer pays his company an unspecified fee.

“We are not looking to sell it, not at today’s prices,” Icahn said. “I made my fortune buying things cheap.”

Icahn also said he does not know if he’ll attempt to re-open the property himself.

New Jersey’s legislature has passed a law that would keep an operator that closes a casino from reopening the property without first settling with unions. The bill strips the casino owner of their license for five years.

The Taj Mahal closed in October after a long battle with city casino unions. That battle mostly focused on health and pension benefits.

The bill’s sponsor is state Senate President Stephen Sweeney, who has said it is specifically targeted at Icahn and the Taj Mahal. The bill would be retroactive to 2016 and is still awaiting action by Governor Chris Christie, who has not said whether he supports the bill.

Icahn’s company has applied to the state Division of Gaming Enforcement for permission to surrender the Taj’s license. The company has also placed a deed restriction on the property.

Since its closing, many union officials have speculated that Icahn wanted to re-open the Taj Mahal in the spring without union labor, but Icahn continues to make moves that make that unlikely.

The news of Icahn’s statements also prompted Atlantic City Mayor Donald Guardian to call on the billionaire to sell the property and move on. Guardian said that the Taj remaining closed for a long period was the “worst of the worst” outcome for the city.

Icahn responded by saying that he’d be glad to sell the property to directly to Guardian if he wanted to buy it, the AP reported. But the price is the $300 million that Icahn claims to have lost on the Taj since he bought it.

In another matter involving a closed Atlantic City casino, the state’s Casino Control Commission is scheduled to hear an issue raised by Glen Straub, owner of the closed Revel casino this week.

Straub has sued the commission saying they are requiring him to obtain a full casino license, even though he plans to lease the casino space at the property and won’t actively run the casino. The state’s DGE has said that Straub may be able to receive a partial casino license.

The commission is expected to address the issue at its January 11 meeting.