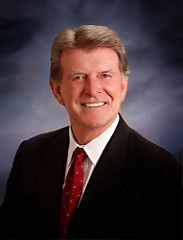 Besides the governor, Boise Mayor David Bieter also endorsed the measure. One of the racetracks that would benefit from the measure, Les Bois Park, is located on the edge of the city limits. Bieter said, “It’s not just a rural issue or an agricultural issue, it goes across the whole state.”

Horse racing is in decline in many states, although that decline is often stopped when the tracks are allowed to have slot machines. The historical horse racing machines have been heavily criticized by gaming tribes and others because they look much like slot machines.

The machines were legal between 2013-2015 until they were banned under pressure from the tribes. Otter tried to veto that legislation, but didn’t submit his veto until past the deadline, so the law stayed on the books.

The state attorney general has issued an opinion that the question of whether the machines are permissible under the state constitution will probably draw a legal challenge, should Prop. 1 be passed.

Opponents claim Prop. 1 would simply expand gaming. Currently the only slot machines allowed are on tribal casinos. Idahoans United Against Prop. 1 have so far raised $2.7 million to fight the initiative. The lion’s share of that came from the Coeur d’Alene Tribe, which operates a casino.