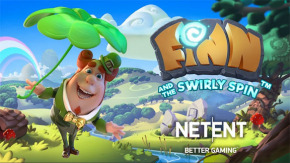 From a visually vibrant slot to a classic table game to a video slot inspired by a popular entertainment show, iGaming sites seem to have an endless slate of games. Here’s an overview of three exciting games to to try out.

1. Finn and the Swirly Spin

Finn and the Swirly Spin is a 3D Net ENT slot game with vibrant and interesting symbols that take you away to a magical place packed with leprechauns.

This game is played on a 5×5 grid that’s fitted with 25 spaces where symbols appear. The symbols across the reels are spades, acorns, rubies, hearts, four-leaf clovers, scatters and the star wild symbol. The ruby is the top cash prize symbol, so if you hit five of them at the maximum bet of $200, you’ll pocket 50x your stake.

This Irish themed slot game comes with a unique avalanche reel feature, known as the “Spin Mechanic,” which allows players to have consecutive wins. It also comes with four free spin features triggered by a number of scatter keys, and the top cash price is a non-progressive jackpot of 500 coins. The game also features the Swirl Spin, Bonus Trigger and Golden Pot Bonus Game.

Sign up to play Finn and the Swirly Spin now at PlaySugarHouse.com, CaesarsCasino.com, ResortsCasino.com, MoheganSunCasino.com and TropicanaCasino.com.

Blackjack is one of the most popular casino table games in the world, and American Blackjack by BetSoft is an excellent example of why. The special features make this game unique, while still keeping the tradition of table Blackjack.

With no flashy animations or bonus rounds slowing down the action, American Blackjack is great for those who want to just play a great game. This game follows the classic rule of comparing between your cards and the dealer’s in order to determine your winnings or losses, but the game also has its own unique rules, making it a different experience.

The maximum bet is $100, but the game features an option where players can double down on any two-card hand. Players can double their initial bet as long as they’re committed to “standing” after receiving one additional card from the dealer. This game also allows players to split two cards if they’re paired or of equal value, so if you’re dealt eight-eight, two-two, king-jack, queen-10, or other combinations, you can create two hands for an additional wager of the same amount. This game is perfect for those who are looking for a more straightforward way to play blackjack online.

Kooza by SG Interactive is a video slot game that invites players to discover one of the most recent revues of the Cirque du Soleil franchise. The game takes place in a unique and colorful universe, inspired by the aesthetics of the show.

Kooza is easy to play because it’s based on classic slot game rules. The game is played on five reels with 40 fixed pay lines, where different symbol combinations result in different cash prizes. The size of your initial wager, plus the symbol combinations you score, determine your future payouts. The higher you go in the pop-up menu, the more money you can expect to win.

Your desired bet can range from the minimum of 20 cents per spin to $400. The most common symbols of the game are the queen, king and ace. Based on a line bet of 10 credits, these symbol combinations are only worth one. The rest of the symbols feature more circus-themed items, like masks, clowns and acrobats. The maximum reward available is 37.50 credits, so in order to win big in Kooza, you need to think big.

The bonus wheel features the most interesting reward, allowing you to unlock other cash prizes and special features, so be sure to keep your eyes peeled for the red bonus boxes. Kooza features state-of-the-art graphics sure to catch your eye.

Sign up to play Kooza at PlaySugarHouse.com and TropicanaCasino.com.