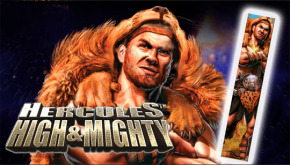 Looking for something new to play over the holidays? iGaming sites offer hundreds of games to entice you to play. Here’s an overview of three of the best.

Become one of the greatest Greek heroes and enjoy Lucrative WILDS, Big Bet Games, a Reels feature that doubles the line total, and a Free Spins Bonus in Hercules: High and Mighty.

This video slot game developed by Barcrest sends players into the world of Greek mythology. Hercules: High and Mighty features bright colors and smooth animations and is pretty simple to play. The game features five reels and 50 fixed paylines at the beginning, giving players ample opportunity to score winning combinations. The more money you bet, the greater chance you have of unlocking bigger rewards.

The minimum bet is 10 cents, while the maximum bet is $250. The game features both classic reel symbols, as well as characters inspired by Greek mythology. You’ll see symbols like the spade, heart, club, diamond and characters like Pegasus and Zeus.

Play Hercules: High and Mighty at CaesarsCasino.com, ResortsCasino.com and MoheganSunCasino.com.

Designed by IGT Interactive, Wheel of Fortune Triple Extreme Spin is an ode to the classic gameshow. The game has five reels and 720 lines, and it offers players a unique gambling experience with a chance for players to make some serious money.

With tons of sound effects and graphics similar to those of the show, Wheel of Fortune Triple Extreme Spin takes it to the next level. Extreme Spin offers two bonus features: Mini Wheel Bonus and Triple Extreme Bonus, each giving players an opportunity to add up prizes in a hurry.

The minimum bet per spin is 50 cents with the maximum being $250. Players should be on the lookout for the Wheel of Fortune logo, which is the highest paying symbol, and the Scatter and Wild symbols.

Cats, another great game created by IGT Interactive, is a five-reel, 30-line slot game that enters players into a jungle-themed world filled with wild and exotic cats.

Each cat has the ability to double your prizes, so players will want to watch out for Tigers, Black Panthers, Lions, Mountain Lions, and Cheetahs. You can play one, three, five, nine, 15 or 30 paylines per spin, with the minimum bet 1 cent and the maximum at $20.

The game offers extras like Wilds, Scatters, Splits and Paw Prints symbols, and a free spin bonus round. During the reels, you’ll also come across the classic poker card values like the Ace, Jack, King, and Queen. The biggest feature of this game is the Split symbols, which allows the game to offer payouts of up to 10 symbols per payline, rather than five.