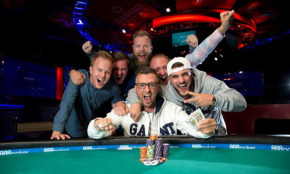 Cash game play is pretty simple. You’re simply playing poker one hand at a time. Each time you win, you simply collect the pot.

As you can guess, in many tournaments play can take a very long time.

That’s why online poker sites offer faster and much shorter versions of tournament play. They are called turbo tournaments and are marked by accelerated play—namely the blinds climb very quickly, usually every five minutes—and smaller fields.

Of course, the payouts are smaller, but you can finish the tournament quickly, usually in less than an hour.

Here’s a look at some unusual turbo formats offered by online poker sites that add a little twist to the standard turbo game:

One of the most popular tournaments at PokerStars are Spin & Go tournaments. They are a Hyper-Turbo Sit & Go that gives players a chance to play for a prize pool that is much bigger than normal tournaments.

Each tournament has only three players, and before a Spin & Go begins, there is a random draw to determine what the prize pool will be. Spin & Gos are available in a range of different buy-ins.

PokerStars also offers Spin & Go Max tournaments which use a randomizer to set the number of players in the tournament, as well as (in most cases) a choice of three first-place prizes. The eventual winner chooses their prize blindly from the three available.

One of the most interesting tournaments at WSOP.com and 888 Poker are Blast tournaments.

In these tournaments, players sit down at a four-handed Super-turbo Texas Hold’em Sit & Go. Once the tournament begins, a drawing takes place to determine the prize pool multiplier, which could be between two and 10,000 times the buy-in and the tournament blinds.

Once the game begins, the Blast timer starts the countdown. When the Blast timer runs out, the action takes over and all players automatically go all-in until there’s a single winner.