In Aftermath of Merger, Expect a ‘Leaner’ Caesars 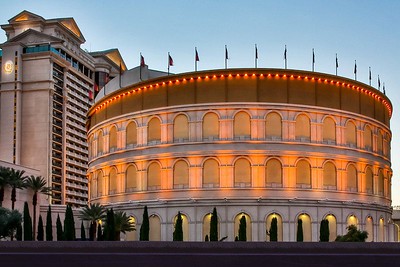 In addition to casino sales, Eldorado’s plans for the post-merger Caesars could see its sizable online and sports betting business floated to investors. Outsourcing theaters and showrooms is also being discussed, possibly including the Colosseum (l.) at Caesar Palace and the new Caesars Forum Conference Center that debuts on the Las Vegas Strip next month.

Big changes are in store for the new Caesars Entertainment as Eldorado Resorts moves steadily toward completing its $17.3 billion acquisition of the Las Vegas-based casino giant.

Eldorado CEO Tom Reeg, who will hold the same position in the super-sized Caesars that will emerge at some point in the first half, is already engineering what a new Bloomberg report terms a “leaner” operation focused on its “core gambling business.”

Already jettisoned are Caesars’ pursuit of a resort license in Japan and a unit that licenses the Caesars name to hotel operators, and further moves Reeg is contemplating could involve selling an interest in Caesars’ online and sports betting businesses, which includes 29 sports books in seven states, and outsourcing the company’s entertainment operations, including its theaters and showrooms, the report said, citing unnamed sources familiar with the situation. These deals could include properties such as the Colosseum concert venue at Caesars Palace and the $375 million Caesars Forum Conference Center scheduled to open on the Las Vegas Strip next month.

It’s been well-publicized that Eldorado and Caesars both are actively shopping some of the 60 owned or managed casinos the new company will command once the merger closes. Given Caesars’ sizable Strip presence, eight resorts in all, that shouldn’t be difficult. And it is seen as key to Eldorado’s ability to pay down some of the hefty debt load the merger will entail, including more than $8 billion of existing Caesars debt.

To this end, the Eldorado brain trust also is looking for $500 million in cost cuts from the new company.

Caesars, meanwhile, has already unloaded several resorts as part of prior deals with VICI Properties, the real estate investment trust spun off in 2017 as part of the company’s Chapter 11 reorganization and sold the off-Strip Rio last year to a New York-based real estate group.

Eldorado has been busily doing the same with its own portfolio, in part to sidestep potential anti-trust problems.

To date, regulators in five states have approved the transaction, leaving 13 still to sign off, along with the Federal Trade Commission.

Caesars CEO Tony Rodio said on the company’s fourth-quarter and full-year earnings call earlier this month that $100 million was being cut through personnel reductions and other moves independent of Eldorado.

The company reported $8.74 billion in net revenues for the year, a 4.2 percent increase over 2018, a result Rodio attributed mainly to “strong demand at our Las Vegas properties, excellent cost controls and the addition of sports betting in several states which drove increased visitation.”

“In addition, our focus on costs and operating efficiencies across the company contributed to the excellent performance,” he said.

He said also the company has experienced no fallout so far from the coronavirus that is spooking gaming investors as it continues to rage worldwide.

“We’re pleased and pleasantly surprised because there has been no business impact from coronavirus,” he said. “We’re watching things closely and we have contingency plans in place. Our bigger concern going forward will be if we start seeing cancelation of domestic travel to Las Vegas because of fears from coronavirus.”

The company reported a paper net loss of $1.2 billion for the year, which was down from $1.5 billion in 2018, on a variety of financial recalculations.

Jefferies’ David Katz was one of the analysts who came away from the call in a bullish frame of mind.

“We maintain our view that the business continues to evolve positively ahead of the merger and has considerable opportunity post-closing,” he said.