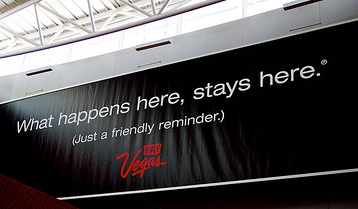 The U.S. economy appears headed for a slowdown, and a Las Vegas economist expects visitation and gaming revenue to soften along with it. In response, it appears the famed “What Happens Here” slogan (l.) could be in for a makeover as tourism officials look for new ways to sell the city.

Next year could be a disappointing one for the Las Vegas resort industry as a slowing national economy makes its impacts felt in the city’s hotels and casinos.

That’s the forecast from Dr. Stephen Miller, director of the Center for Business and Economic Research at the University of Nevada Las Vegas (UNLV). Miller tempered his analysis with some good words for the broader local economy, which remains robust compared to the rest of the country, both in terms of retail sales𑁋up 6.7 percent through September and population growth, which the center expects to exceed 2 percent in 2020 and 2021.

“I think people should feel comfortable about the future of the Southern Nevada economy over the next two years,” he said at an annual briefing sponsored by UNLV and the Las Vegas Global Economic Alliance. “But as is always the case, you should keep some of your powder dry, because you never know when the next recession will come.”

He’s not as optimistic as Chris Thornberg, a founder of Southern California-based Beacon Economics and director of the UC Riverside School of Business Center for Economic Forecasting and Development, who also spoke at the event. Thornberg expects GDP nationally to rise a healthy 2.5 percent in 2020.

“I call it the un-recession,” he said. “It’s been a year since all these pessimists and bears have been telling us the expansion is over. You don’t see anything in the statistics that suggests an economic slowdown occurring at all. Rumors of this expansion’s demise are highly overrated.”

Miller, on the other hand, predicts a slide of more than a percentage point in each of the next two years compared to 2018’s 2.9 percent increase.

Along with that, he said the center expects visitation to Las Vega will finish strong in 2019𑁋up 0.8 percent year-on-year𑁋but it will rise only 0.3 percent in 2020 and could decline by 0.4 percent in 2021.

Next year will be a flat one for hotel occupancy as well, he said, but that will change for the better in 2021 with the opening of Resorts World Las Vegas, the Strip’s first mega-attraction in a decade, which should help bump occupancy up by around half a percent.

Gaming revenue growth will not measurably increase, but will finish roughly even with the center’s prediction for 2019 of plus-1.3 percent and then dip to 1.2 percent in 2021.

The counter to all this is that McCarran International Airport continues to set passenger records—up 3.5 percent through October—and Miller said he finds it strange that gaming and hospitality aren’t following suit.

He suggested part of this could be blamed on declining visitation from people driving from Southern California, noting that traffic at the border at I-15 is down 1.1 percent through October, according to official counts, and was down 3.7 percent in October alone.

“The question is whether that is parking fees and resort fees,” he said. “That may play into it, but whether it’s big enough to keep the visitor volume soft, I don’t know.

“The leisure and hospitality industry has been soft for a couple of years now,” he added, “but the unknown factor that plays into this over the next five years is supposedly 12,000 rooms coming online. There was a shortage of rooms, and the question is, will those new rooms bring in visitors? That’s hard to forecast.”

He compared the situation to that of Reno, terming it “a tale of two cities” in which Northern Nevada has diversified its economy “much more” than Las Vegas with significant additions like the Tesla giga-battery factory and its thousands of jobs and with other industries.

Some 15 percent of Reno’s employment is tied to leisure and hospitality, down from the high 20s before the Great Recession, while Southern Nevada’s remains largely unchanged at closer to 30 percent.

But that’s to be expected, he said, because gaming and hospitality is more than 70 percent of the Southern Nevada economy.

It does appear, however, that Las Vegas tourism officials are wondering whether changing circumstances shouldn’t call forth a new mantra to replace the famed “What Happens Here Stays Here” that’s served the city for so long.

The Las Vegas Review-Journal says it may have been Aerosmith’s Steven Tyler who introduced the new thinking during a recent performance at the Park Theater on the Strip, where the band is in residence until February.

“When I say, ‘What happens here,’ you say, ‘Only happens here!’” the singer repeatedly told the crowd.

Following on this the Review-Journal hinted that a larger campaign would soon be unveiled to roll out “What Happens Here Only Happens Here” as the new slogan.

Actually, the Las Vegas Convention and Visitors Authority and R&R Partners, the ad agency behind “What Happens Here Stays Here,” have been at work crafting a new image to present to the outside world for a couple of years, and as with “What Happens Here Stays Here,” which was conceived when visitation plummeted after the 9/11 attacks, it was trauma that’s prompted the latest re-think.

In the wake of the October 2017 mass shooting at an outdoor concert on the Strip, the deadliest such attack in U.S. history, which took more than 50 lives and left hundreds injured, the LVCVA and R&R came up with a toned-down message that played off the #VegasStrong slogan that was sweeping Twitter feeds after the tragedy. “What Happens Here” was shelved in favor of a new spot featuring a cityscape and the voice of Las Vegas native and retired tennis star Andre Agassi, who asked, “What is strength? Strength is valet parkers who become medics, mothers who become emergency responders.”

Early the following year, as if to signal a return to normalcy, “What Happens Here Stays Here” was revived with a new spate of television and online ads.

As for “What Happens Here Only Happens Here,” it conveys a similar appeal to tourists looking for what they can’t find anywhere else, but on a different and arguably more expansive level, as Michael Green, a professor of history at UNLV, suggested to the Reno Gazette-Journal.

In other words, if it’s not about the gambling anymore, maybe it’s not necessarily about the “sin” either. Instead, what separates Las Vegas from the rest of the competition nowadays, Green said, is its uniqueness as a 24/7 destination of non-stop spectacle, defined by A-list entertainment, top-shelf restaurants and high-end shopping, not to mention world-class casinos and, more recently, major league sports.

“You go to the other places to get your bachelor’s, but Las Vegas is where you go for the graduate degree in fun,” he said. “You warmed up over there. That’s the bullpen. Come here to get in the game.”