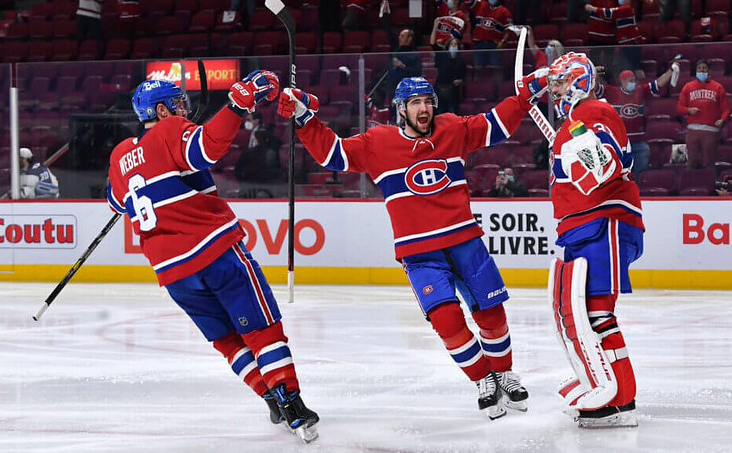 The biggest surprise of the NHL Playoffs second round is the odds-defying performance of the Montreal Canadiens. The Habs barely made the postseason, and now have a seven-game winning streak.

Other series have been back-and-forth contests. As of Wednesday, the New York Islanders had a 3-2 lead on the Boston Bruins, and the Vegas Golden Knights were up 3-2 on the Colorado Avalanche.

But the surprise of these Stanley Cup Playoffs continues to be the Montreal Canadiens. The Habs were the last team in the North Division to make the postseason, then shocked with their strong showing. First, they downed the division-champion Toronto Maple Leafs in seven games in the first round. Then they swept the Winnipeg Jets in the second round.

Check out the rest of our NHL season coverage at iGamingPlayer.com, and stick with us until your team hoists the Stanley Cup.

Montreal became the first team to advance to this year’s Stanley Cup semis, and was definitely the most unlikely. The team was +105 coming into the series to defeat Winnipeg, which was -125 to advance to the next round. Instead, Montreal will now await the winner of the Golden Knights-Avalanche series.

“They’re playing at a really high level right now,” Wheeler said. “You just have to give them all the credit. We just couldn’t get the first goal. That plays right into their hands.”

Montreal goalie Carey Price was a big reason the team advanced to the next round of Stanley Cup contention. Price allowed six goals in four games on 103 shots. He added a shutout in the second game.

Forward Tyler Toffoli said he and his teammates are embracing the underdog role, which will likely continue in the semis.

“It kind of feels like nobody believes in us,” Toffoli said of these playoffs. “The only people we have are ourselves and our fans… So we’re sticking together, we’re playing as one, we’re winning games and we’re having fun.”

Tampa Bay didn’t sweep Carolina in the second round, but they weren’t pressed much. The defending Stanley Cup champs needed just five games to brush aside the Central Division winners. Now Tampa Bay will face the winner of the Boston-New York series (Islanders prevailed Wednesday, 6-2).

The Lightning will most likely be a slight favorite in the semis. The team began the second round as a -270 favorite against the Hurricanes, but by Game 5 they were -1400 to win the series.

Goaltender Andrei Vasilevskiy had a shutout in Tuesday’s game. The netminder is one of three goalies who are finalists to win the Vezina Trophy. He’s the -150 favorite to take the honor for the league’s best goaltender—and he’s been here before, having won the Vezina in 2019.

Tampa Bay head coach Jon Cooper said neither of the two series have been easy. “I’ve been coaching a long time and I’ll tell you, those are two of the toughest rounds I’ve ever experienced,” Cooper said.

Join the family of fans at PlaySugarHouse.com, and your first deposit will be matched 100% up to $250. Its 1X play-through requirement is the best anywhere!

The New York Islanders came into the second-round series with the Boston Bruins as the biggest underdog of the four contests at +180. But New York came back from 1-0 and 2-1 deficits to take a 3-2 lead.

As noted above, the Islanders whupped the Bruins 6-2 in Game 6 on Wednesday, and will go on to face the defending Stanley Cup champs, the Tampa Bay Lightning.

Vegas Ready to Close Out Series

Game 5 in Colorado Tuesday was a must-win for the Vegas Golden Knights. They were able to get the victory, winning 3-2 in overtime. The team now returns home with a chance to close out the series on Thursday.

Oddsmakers have Vegas the -145 favorite to win Game 6. If they don’t make it, it’ll be back to Colorado for a deciding Game 7.

No matter who wins on the ice, you’ll win at HardRockSports.com. Deposit $100 or more, then place your first sports bet of at least $100. If your pick doesn’t win, you’ll get back $100 in cash.