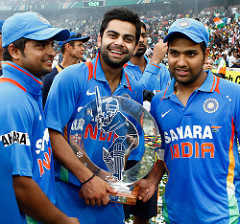 India’s Sports ministry has been holding consultations about a possible legalization of online gambling according to the Indian Express newspaper.

The paper cited an unnamed source as saying that several different government administrations have been approached with a proposal and informal consultations have been held. The discussions were characterized as the early stages of developing an online framework and it could take as long as two years for a final proposal to emerge.

The source said the country is looking to the UK’s gambling framework as a model and seeking advice from the UK Gambling Commission.

Reports also say that the country’s Sports Secretary Injeti Srinivas is currently in England to discuss the terms of a possible Memorandum of Understanding with the commission. Online sports betting will be one of the important points in that memorandum, the unnamed source told the paper.

Sports betting is illegal in India, but betting on horse racing is allowed. Horse racing bets are taxed at 28 percent.

The country’s illegal sports betting market is valued at $150 billion according to a report by India’s International Centre for Sports Security. The country has also seen a strong market for online poker and several sites—including PokerStars—have been looking to expand into India.