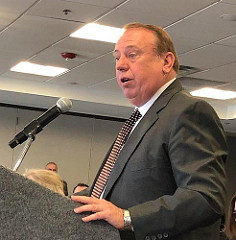 The Indiana Gaming Commission recently approved the sale of the Majestic Star Casinos in Gary to Indianapolis-based Spectacle Entertainment for an undisclosed price. The new owners then threw a party for team members.

Rod Ratcliff, chairman and chief executive officer, said the company wants to move one of the two Majestic Star casinos to a land-based site along Interstate 80/94, and move the second Gary license to Terre Haute. He said if the legislature allows it, Spectacle also will build a new $300-$400 million facility with a 200-room hotel at the land-based site. But, Ratcliff added, the casinos still will operate in their current vessels for two years, even if the legislature approves the moves this year.

Indiana gaming analyst Ed Feigenbaum said if the legislature approves the two moves, Spectacle probably would invest a substantial amount of money building a whole new facility with the potential for a hotel.

“If the legislature says no, they’ll have to sit down and take a long look at their property. It will be a longer venture than they probably anticipated,” Feigenbaum said.

Meanwhile, Ratcliff said guests and team members soon will notice several improvements around the two vessels. “I don’t think we’ll remodel the boats, but we want to fix everything that’s broken. There are a lot of broken lights,” Ratcliff said.

New General Manager Jahnae Erpenbach, formerly Spectacle’s vice president of operations, said Spectacle already has launched a three-pronged approach including replacing several hundred old slot machines with the newest and most popular models: offering a new guest benefit app for smart phones; and introducing a new customer service program. “There is some room to grow,” Erpenbach said, adding the casino will remain Majestic Star for now but not for very much longer. “The name change needs to be done at the right time,” she said.

Whether or not the legislature approves Spectacle’s plans for the Majestic Star, Erpenbach said she has a lot of confidence in the casinos’ future. “Spectacle Entertainment is really a trailblazing type of company. It’s an Indiana-based company owned and operated by Hoosiers who helped establish gaming in the state. I think we’re the company that can get this done,” she said.

Current employees also are looking ahead. Director of Table Games Operations Thomas Gutierrez said, “I think our opportunities are limitless. This is a dream. I’ve always been proud to be a member of the Majestic Star team, but with this exuberance I feel we can do great things.”

Meanwhile, the Indiana House Committee on Public Policy recently discussed S 552, an omnibus gambling bill that would legalize sports betting. Prior to the meeting, where no vote was to be taken, committee Chairman state Rep. Ben Smaltz said, “We’ll hear the bill as written, get input from all the stakeholders and the public on what they think about the gaming bill in its entirety and use what we learned to make adjustments to the bill if necessary. The first step will be to hear the bill as is, and the following step to work on changes.”

Previously in the House, the sports betting bill H 1363 died halfway through the session, which will end April 29. However, state Rep. Heath VanNatter, a co-sponsor of the bill, said that should not be taken as a sign the House won’t approve sports betting. “I think the only reason the House didn’t do it is we had a busy first half of the session and we knew the language was moving in the Senate bill,” VanNatter said.

He added S 552 is likely to lose some of the numerous other gambling bills attached to it. “We didn’t realize how big that bill was going to get and what they were going to shove into it. I’m not saying that bill won’t pass, but it’s not going to pass in the current form that it came out of the Senate,” VanNatter said.

But he warned removing certain provisions of the legislation could threaten its chances of passing. “Everybody is in favor of the bill because there’s something for everybody. But there’s no way it’s all going to stay in so, as soon as some of it drops out, you’re going to have people dropping support of the bill. It’s going to be a lot more difficult to pass in the House than in the Senate,” he said.

S 552, which easily passed in the state Senate, would allow the state’s 12 casinos, two racinos and off-track betting parlors to apply for sports betting licenses. Also it would allow mobile wagering after registering in-person or via smartphone. “I think it’s an easy reach for allowing sports wagering in the casinos. That seems similar to adding any other table or video game,” Smaltz said. But he added some places in the state, like his district and Indianapolis, have chosen not to host casinos. Therefore, he said, he’d like public input on mobile betting. “I think that the public has to make the decision on if they want wagering available throughout the four borders of the state of Indiana. I think the answer to that in a lot of places is probably not.”

But VanNatter said, “I think we’ve got to have mobile betting too. There’s no way it’s successful without mobile. Very few people drive to the casinos to do it.”

In 2017, Indiana casinos generated more than $600 million in gaming tax revenue for the state, ranking it fourth after Pennsylvania, New York and Nevada.