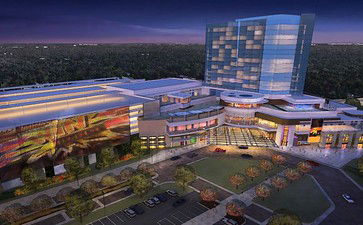 Despite Covid-19, construction continues at the Hard Rock Casino (l.) in Gary, Indiana but the originally scheduled opening of December 31 is unlikely. The $300 million, 200,000-square-foot casino will offer 1,650 slots, 80 table games and a 2,000-seat entertainment venue.

Construction of the Hard Rock Casino in Gary, Indiana is on schedule, despite Covid-19, but officials said it’s not likely to be open by December 31, as originally planned.

John Keeler, vice president and general counsel for developer Spectacle Entertainment LLC, said, “The December 31 opening, frankly that’s not going to happen. That’s just the way things go. I think it would be safer to say sometime in the first quarter (of 2021). It just depends.”

Keeler said although Governor Eric J. Holcomb ordered a statewide shutdown in April, an executive order allowed work on the casino to continue. “In all the troubles we’ve all gone through in 2020, this is a bright spot,” Keeler noted. “It started in earnest before the disease came along and fortunately, the type of construction work didn’t require people to be in close proximity.”

The facility’s footings have been poured, steel framing is in place, the roof is completed and the building’s skin is up. However, a lot of site work still needs to be done. Keeler said bids for interior work will be sought in the near future.

The project has faced its share of challenges. In late March, thieves stole about $25,000 in construction equipment after a break-in at trailers at the site. Missing items included concrete cutters, a sweeper, two generators and other equipment, Gary police said.

Also, clearing the site wasn’t easy. Keeler said, “I’ve never seen so many thrown-away tires. Some land we acquired had been junkyards or were still operating junk yards.”

The $300 million, 200,000-square-foot casino will offer 1,650 slots, 80 table games and a 2,000-seat entertainment venue. It replaces the two Majestic Star casino riverboats acquired by Spectacle in 2018, which had been docked in Buffington Harbor in Lake Michigan.