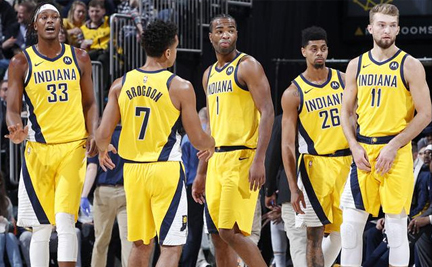 The Indiana Pacers and sportsbook PointsBet have forged a new multiyear partnership, making PointsBet an official partner of the team. What does it mean for bettors? A pretty good signup deal, and a monster promo.

As part of the agreement, the PointsBet brand will be displayed along what’s known as the “apron,” the out-of-bounds space between the baseline and the team bench. It’s the first time a sportsbook will occupy that space.

PointsBet signage will be prominent throughout the Fieldhouse, including on phone charging stations and along the scorer’s table; PointsBet will also have a presence on the Pacers’ digital platforms.

How ‘Bout that Bucket? 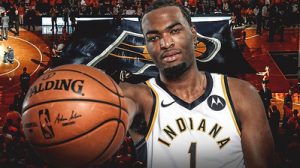 It’s great timing for this alliance, with Pacers forward TJ Warren (l.) growing his rep as “the walking bucket.” This NBA season’s unlikeliest breakout star, “bubble Warren” has been compared by one Twitter fan to primetime Michael Jordan.

That comparison might hold. Warren kicked in 32 points in the Pacers’ rout of the Orlando Magic on Tuesday, after contributing an astounding 53 points versus the Philadelphia 76ers and 34 against the Washington Wizards.

There are just two 3-0 teams in the NBA right now: the Phoenix Suns, angling for the eighth spot in the West, and those Pacers.

“This corporate partnership with PointsBet represents a real win for both companies,” said Rick Fuson, Pacers Sports & Entertainment president and COO. “We look forward to welcoming them in as a very visible brand at the Fieldhouse and through our various channels.”

Cash in now! Celebrate the Pacers-PointsBet partnership with a new signup offer. Just create a new player account at PointsBet.com. You’ll get $100 in free bets when you deposit and bet just $20.

Hey, Hoosiers! Get In On this Promo

Join PointsBet’s Crowd Booster for the Pacers-Los Angeles Lakers game, coming up on Saturday, August 8, to be televised on TNT.

For every 100 bets on the Pacers’ spread, the spread will increase in your favor. The line started at +7 when it opened August 4 and was up to +13 the next day. Who knows how far it can go? But the last time PointsBet ran a similar promotion, the Pacers closed +31.

The maximum bet amount is $25; the promo is available only to account holders in Indiana.