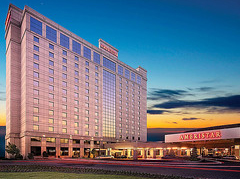 Just in time for the National Football League’s Bears versus Packers September 5 kickoff, Penn National will launch a sportsbook at Ameristar Casino East Chicago on September 1 and Caesars Entertainment will open the Book at Horseshoe Hammond September 4. Both venues expect Chicago bettors to cross state line to Indiana to place their wagers.

Ameristar Casino East Chicago General Manager Matt Schuffert stated, “Our customers are very excited to start wagering on sports. The passion for Indiana and Illinois sports teams runs deep in this region, and we look forward to becoming a destination for fans all year-round.”

Bettors will be able to place wagers at kiosks and at ticket writer stations located in the new sportsbook near the casino’s main entrance, featuring a betting counter, large odds boards and numerous television screens.

Penn National has 41 casinos in 19 states, including 10 jurisdictions with regulated sports betting and more to follow. The company has multi-year sports-betting operations agreements with DraftKings, PointsBet, theScore and the Stars Group. Penn National retail sportsbooks are managed by William Hill US at the company’s casinos and racinos in Nevada, Mississippi and West Virginia.

Caesars Entertainment Regional President and Horseshoe Hammond General Manager Dan Nita said, “We’re ready to welcome Illinois bettors with open arms and give them a world-class experience like we always have. This is a huge opportunity for us and for Indiana. We’ve worked really hard to get this ready, and we’re excited to share it with fans on both sides of the state border who have wanted this for a long time.”

Boyd Gaming officials said it plans to launch sportsbooks at Belterra in Florence and Blue Chip in Michigan City in September. Tropicana Evansville officials also said its sportsbook will open in September.

Other pending sportsbook locations include Tropicana Evansville, the French Lick Casino and the Rising Star Casino Resort in Rising Sun.

Indiana will become the 12th state to operate legal sports betting following the U. S. Supreme Court’s repeal of the federal ban.

Over the Illinois state line, Governor J.B. Pritzker signed an expanded gambling bill in June. It doesn’t set a deadline, and regulators currently are working on guidelines and rules. Illinois Gaming Board Administrator Marcus Fruchter said, “We’re following a process, and we’re going through and making sure we have the right approach for the state.”