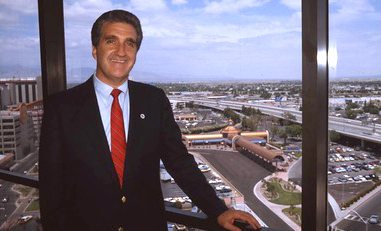 Former Las Vegas Mayor Ron Lurie, who is best known for his long term as executive vice president and general manager of Arizona Charlie’s Decatur, has died at age 79.

Longtime gaming industry veteran Ron Lurie died on December 22 at the age of 79. A Las Vegas lawmaker for almost 20 years, Lurie also served a single term as the city’s mayor.

According to the Las Vegas Review-Journal, Lurie suffered from blood cancer and associated health problems, complicated by Covid-19.

“He really enjoyed nothing more than public service,” said Lurie’s son Ben, who called his father to be a “visionary” who loved Las Vegas.

Tributes poured in from public figures including Nevada Governor Steve Sisolak, who wrote on Twitter, “Ron was a dear friend and an exceptional public leader who devoted two decades of his life to public service. Kathy and I are holding the Lurie family close in our hearts.”

Las Vegas Mayor Carolyn Goodman called Lurie’s death “a loss for our community. Ron was a man with a giving heart and huge smile.”

Councilman Cedric Crear called Lurie “a classic Vegas guy. He will be deeply missed. He was a very good man and he cared about Las Vegas and we are grateful for his service to our community.”

Lurie was a second-generation Las Vegan whose father, Art, was a boxing judge and former chairman of the Nevada Athletic Commission. He spent 14 years on Las Vegas City Council before serving as mayor from 1987 to 1991. He declined to run for a second term, and in 1999 became general manager of Arizona Charlie’s Decatur, his “real home,” according to son Ben. The property’s signature restaurant carries his name: Ron’s Steakhouse.

“Being the general manager of a property is just like being a politician. You have to be able to communicate well,” Ron Lurie told the Review-Journal in a February 2007 interview. “Local customers are pretty savvy, and to be successful, you have to know what’s important to them.”

According to CDC Gaming Reports, at the helm of Arizona Charlie’s, Lurie helped the 258-room casino fend off competition for local customers with newer, larger properties built in the 1990s and 2000s.

“I know I’m doing something right when I see our competition walking through here looking at my games or looking at my menus,” Lurie said. “They might try to pick up on something we’re doing, and they want to try and do it better. I just think we have to continue to build a better mousetrap.”

Lurie also worked as a sales executive for several gaming equipment providers, including Sigma Games and International Game Technology, and sat on the boards of the Nevada Wildlife Commission, the Boys & Girls Club of Southern Nevada, the American Heart Association and other organizations, his son said.

Lurie retired in January, but remained “an ambassador” for Arizona Charlie’s. A statement from Golden Entertainment, which owns and operates the property, said he “made an indelible mark on Las Vegas through his work as a leader in the gaming industry, as a philanthropist, and as the former mayor of Las Vegas. Through his work as a civil servant, in his gaming career and in his daily life, Ron was a champion for our community and was committed to making Las Vegas a better place for future generations.

“This is a tremendous loss for Las Vegas and our hearts and condolences are with his family,” the statement concluded.